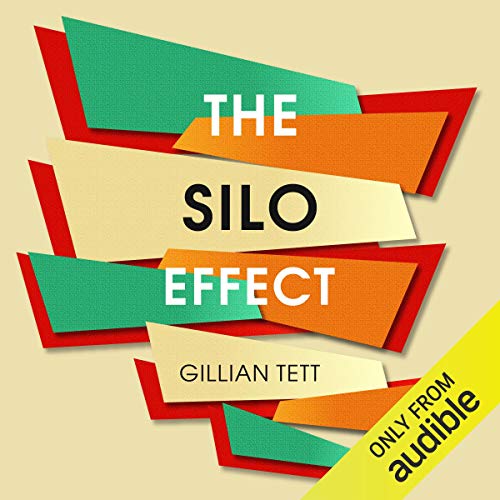 By: Gillian Tett
Narrated by: Eilidh L. Beaton
Try for £0.00

In The Silo Effect, award-winning journalist Gillian Tett examines the structural development of institutions such as UBS, Sony and the Bank of England. While the world is increasingly interlinked in some senses, it remains profoundly fragmented in others.

As organisations become larger and more global than ever before, they are apt to be divided and subdivided into numerous different departments to facilitate productivity. However, there is a trap to the inevitability of these silos. The tunnel vision and tribalism that silos can lead to makes groups less innovative and can lead to disastrous mistakes.

Institutions worldwide are made up of silos operating in isolation from one another. The Silo Effect is an eye-opening account that takes a radical anthropological approach in suggesting how we might draw them back together.

Gillian Tett is assistant editor for the Financial Times, where she has worked for 15 years. In 2008 she won the British Press Award for the Financial Journalist of the Year. She often appears on programmes such as Today and Newsnight and lectures widely.

What listeners say about The Silo Effect

Good Book Shame about the Narrator

Would you try another book written by Gillian Tett or narrated by Eilidh L. Beaton?

Maybe I shouldnt blame the narrator but one thing spoilt this book for me. Her ridiculous use of accents when quoting real life characters. The French accent sounded like something from "Allo Allo", the Australians from a Fosters add and her American accent was appalling !! And why stop there..why werent the Sony execs given a Japanese Accent? Why didn't she differentiate between Americans from New York, Texas or Illinois... they have different accents . This ruined the whole book for me and made it almost un-listenable to

The 8 stories are interesting.

Who might you have cast as narrator instead of Eilidh L. Beaton?

Anyone. Although maybe the producer should be blamed.

Yes, if made into a documentary

A well evidenced and researched book but it does get a bit repetitive. I expected it to be more about human behaviour and reasons why groups form silos. There is some of that but it's predominantly stories about examples of silos in action.

Great with some repetition and dodgy accents

I really enjoyed this but there was some repetition or bits I personally found a bit boring. Overall I found it very enlightening. The accents by the author were terrible, but who cares. Quite amusing really.

detailed but not all relevant

the background detail of exapmles too much that lost point. at times. some key pointers.

I enjoyed hearing the anecdotes about UBS, Sony, NYC Mayors Office, CPD, Facebook and Blue Mountain Capital. But I do think much detail was laboured over in the specialist financial trading descriptions that could have been left out to make the book a little more accessible. The author presents a very clear manifesto for the destruction of harmful silos and even a veritable how-to guide. It's a great book. As for the audiobook, the narrator slips into impressions of each character quoted throughout the story, which jarred me a little at the start as I wasn't prepared for it, but later I came to enjoy it and felt it lent a flavour to the book. Definitely recommended reading.

I thought this book was a game changer and the narrator spot on. I've already sent a copy of the book to colleagues and look forward to applying the concepts to my own field.

I also really enjoyed the reading style, the narrator had a charming voice and rhythm which I found engaging.

I'll be highly recommending both book and narrator!

Thought provoking and relevant whatever your profession. The ideas and perspective shed light on many of the day to day frustrations we all experience.

Some good case studies across a broad range of industries. Found value in the insights especially from Sony, Facebook, Cleveland Health & Chicago Police.