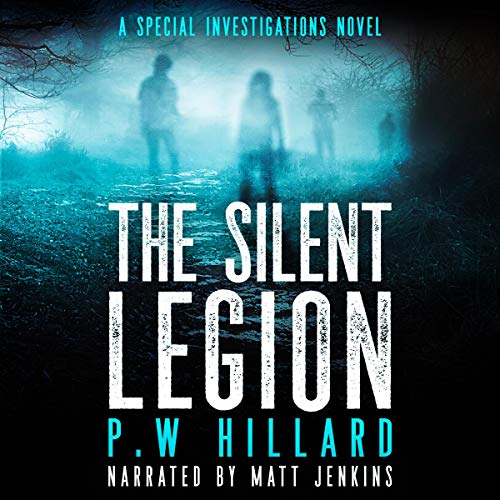 Supernatural creatures are turning up dead. Their killers? Very much human.

Detective Constables Jess Holden and Mark Curren are no strangers to life as part of the Special Investigations unit - a secret organization hidden beneath New Scotland Yard. They are the one thing defending mankind and the supernatural from one another.

When supernatural beings start turning up dead and the cases keep piling up, the detectives lead a desperate chase to find the killer. After a gang of vampires becomes involved, the battle threatens to spill out of the shadows and into the streets.

Ancient secrets threaten to come bursting forth as 1,000 years of silence becomes a deafening roar. Jess and Mark plunge themselves into a case they realize might by their most dangerous yet.

A dark breathless horror thriller from the macabre mind of P. W. Hillard, The Silent Legion is the second novel in the Special Investigations series.

What listeners say about The Silent Legion

Monsters coming out of the woodwork

Detective Constables Jess Holden and Mark Curren are back again battling the supernatural. Vampires dealing drugs. Roman guards fighting wolf men. Not to mention brownies, the oracle and other supernatural creatures. The narrator's impression of Dracula was so terrible it was funny. Although The narrator is not good on accents, he reads the story well. As usual Jess and Mark are in the thick of it. This is one of their most dangerous cases which they have to solve. A cracking yarn with a bit of everything.

Not my preferred genre

This was a little hard to follow at times and not my preferred genre. I had problems with the story keeping my attention. It was definitely action packed and a good monsters vs mankind story. I was given an Audible copy of this book by P.W. Hillard for an honest review.

This is the second book of the Special Investigations series. I didn't read these books in order. Needless to say, they work as stand-alones. However, you'll understand more if you do read them in order. That being said, I didn't care so much for Book One until I tried it again through Audible. Listening to it give it that special something. Matt Jenkins is the perfect narrator. His voices are unique and for the most part, you can tell who's talking from the voice.

Mr Hillard does have a way with words and his descriptions of the various "monsters" are amazing. His plot points hold and transitions smoothly throughout the book. When I begin this series, I never thought I'd actually read the whole thing. But now that I've read the first three books, I'm looking forward to number four.

Really like the 1st book, and enjoyed this one even more. Great characters, great story line, and very likable characters. The mythos interwoven into modern Europe is seamless.

A great thriller with a chilling side, this is a great read for those who love the genre. I really enjoyed it and I'm looking forward to the rest of the series.

Matt Jenkins does a great job with the narration.

I seen some of the reviews that were very poor and I have no idea why. Again this is more a Thriller story then a Horror story and I enjoyed it. I personally do not like or read Horror stories so was a bit apprehensive about listening to it originally. I have listened to both books and plan on listening to the 3rd also.

This novel centered on the existence of the Special Investigations department whose goal is to keep supernatural creatures and normal humans from killing one another is very entertaining. Obviously that's not working because supernatural creatures keep coming up dead in their area and it becomes their job to figure out why and stop it before the tenuous peace ends.

The story is great, the narration is pretty solid.

I received the review code for this audiobook at my request and have voluntarily left this honest review.

This would make a great movie.

The Silent Legion. . book 2 in the series. .
This audiobook is funny in places and all round tongue in cheek fun entertainment.
Great storyline with a unique view. Characters are very well developed and the police nearly believable. Whilst the supers are classic.
I really hope someone will make this into a movie.
Superb entertainment.
Narration is excellent and compliments the book totally.
I received a free copy of this audio book at my own request and voluntarily leave this honest review. .

I've really enjoyed this series so far. I read the first and second book in the Silent Legions series. Crime/cop drama isn't really my bag but when I read they investigated supernatural beings and crimes, well, that piqued my curiosity. I am so glad I did.

The main villain in this book was unintentionally hilarious at times and I enjoyed every second of his presence. I really enjoyed all the supernatural characters. Each one was well fleshed-out and dimensional. There was just enough background on each of them to to help readers really understand; even though they aren't exactly human, there's a lot of humanity in them. They are actual supporting characters, that enrich the story. Not just another group of cliched supernatural troupes.

Most of the main human characters though, were a bit... vanilla. It was kind of hard remember who was who but then I realized it didn't really matter. they were all just kind if interchangeable for me. The attention to detail was definitely spent on the supernatural characters and I'm ok with that.

The plot was interesting and original. It didn't feel unnecessarily drawn out or rushed in parts. It kept a good pace throughout and I enjoyed the many twists and turns along the way. If you're a fan of X-files type investigations, but can also appreciate a bit a good humor sprinkled in, I think you would enjoy this series too.

The narrator wasn't my favorite. My main complaint was the villain's voice. The narrator tried really hard to give him the stereotypical "Druhc-ula, who vants to sucka your blahd" accent but it was just...clumsy and unnatural. The other voices were pretty good though.

The Silent Legion is a phenomenal book that has vampires, brownies and other supernatural creatures. This is my first book from P. W . Hillard but will it be my last because this book is filled with horror that even scared me and I am a horror fiend. I loved the creepy characters and the storyline was strong and creepy.
I highly recommend this book of you love being scared. I was given this review copy audiobook at my request and I am leaving my honest review voluntarily.