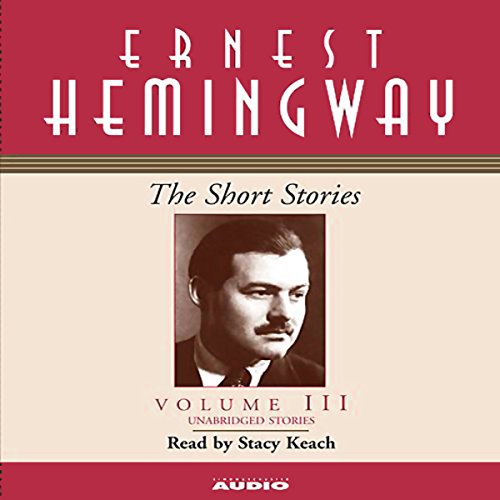 Before he gained wide fame as a novelist, Ernest Hemingway established his literary reputation with his short stories. Set in the varied landscapes of Spain, Africa, and the American Midwest, this definitive audio collection traces the development and maturation of Hemingway's distinct and revolutionary storytelling style - from the plain bold language of this first story to his mastery of seamless prose that contained a spare, eloquent pathos, as well as a sense of expansive solitude. These stories showcase the singular talent of a master, the most important American writer of the 20th century. The Short Stories, Volume III features Stacy Keach reading such favorites as: "An Alpine Idyll", "A Pursuit Race", "Today is Friday", "Banal Story", "Now I Lay Me", "After the Storm", "A Clean, Well-lighted Place", "The Light of the World", "God Rest You Merry Gentlemen", "The Sea Change", "A Way You'll Never Be", "The Mother of the Queen", "One Reader Writes", "Homage to Switzerland", "A Day's Wait", "A Natural History of the Dead", "Wine of Wyoming", "The Gambler", "The Nun and the Radio", and "Fathers and Sons".
(P)2006 Simon and Schuster Inc.

Stories were average. Narration was excellent.

There were 3/4 later stories that I could have done without. "Wine of Wyoming" was a lot of fuss over nothing. In "A way you'll never be" his description of the battlefields are gut wrenching, especially knowing they were taken from his own life experience. Lord, how do you sleep with all that in your memory? Stacy Keach is an excellent narrator. I know a gentleman called Robert Garrett who is possibly comparable. I stumbled into Robert when I did the auditions for my own audio book. "Rough Ground". The music was suicidal. The production company appear to have plenty of money, so why pick on this dirge? I only know Hemingway from his writing and so have no knowledge of his personal views on homosexuality and antisemitism. His choice of certain words I find offensive. I definitely would not accept them from a modern writer. My next Hemingway was to have been "The sun also rises". The critics rate it as his best work, but readers are not that keen, so I will reconsider. A note to C. O'keefe. I admire your tenacity in writing your review, well done, awesome. If anyone would like to share their thoughts occasionally I'm on 3rdpersonPOV@gmail.com

Best of the three but still not perfect

So as before I decided to continue to listen to Ernest Hemingway’s short stories (which as a writer have taught me a lot). The fact that Stacey Keach does an amazing job reading them made my decision easy. As per usual this is an audio from from Audible.

Phew! Every story reviewed. I’ll state here now that I don’t plan on ever doing that again, it’s too time consuming. Out of the 20 stories I really enjoyed 10 of them and found 5 more to be ok. So as usual a mixed bag (but mostly good stuff) from me. Please don’t let children listen to this, ages 16+ please. As I predicted I did enjoy this volume the most out the three. So I give this a medium recommendation if you’re a shorty story fan and of course If you’re Hemingway fan it’s a must listen, though I would do yourself a favor and just skip the 5 I didn’t like.

Another fantastic set of classic Hemingway short stories. The stories themselves remove you from this world and engross you in them, in the best possible way. Outstanding performance again from the narrator!

The early work is still so charged and crackling and exciting. Keach's laconic, suave voice and measured intonations are pitch perfect.

Maybe I’m to simple to understand why stories about common subjects, with simple people, that don’t have symbolism or metaphors, are worthwhile.