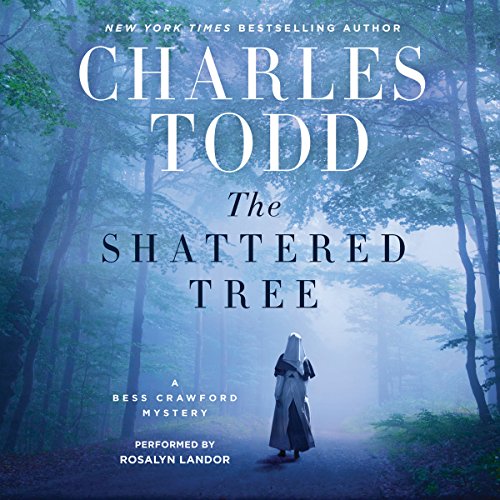 At the foot of a tree shattered by shelling and gunfire, stretcher bearers find an exhausted officer shivering with cold and a loss of blood from several wounds. The soldier is brought to battlefield nurse Bess Crawford's aid station, where she stabilizes him and treats his injuries before he is sent to a rear hospital. The odd thing is the officer isn't British - he's French. But in a moment of anger and stress, he shouts at Bess in German.

When Bess reports the incident to Matron, her superior offers a ready explanation. The soldier is from Alsace-Lorraine, a province in the west where the tenuous border between France and Germany has continually shifted through history, most recently in the Franco-Prussian War of 1870, won by the Germans. But is the wounded man Alsatian? And if he is, on which side of the war do his sympathies really lie?

Of course Matron could be right, but Bess remains uneasy - and unconvinced. If he was a French soldier, what was he doing so far from his own lines...and so close to where the Germans are putting up a fierce last-ditch fight?

When the French officer disappears in Paris, it's up to Bess - a soldier's daughter as well as a nurse - to find out why, even at the risk of her own life.

What listeners say about The Shattered Tree

The path to Hell

I was disappointed in this book. Bess Crawford seems to be behaving like a spoilt child, not a responsible nurse that her alter ego assumes. At the front she is sensible, but in Paris where she meant to be convalescing she gads about like a spring lamb. I am sure if I were wounded such actions would not be possible. She does seem to be very silly in her reluctance to confide in Simon or one of the other officers around her.

I am sure I will buy more of this series, hoping that this is an aberration, because she cannot go on as a one-man band or Wonder Woman. It really is becoming too improbable.

I love this series about Bess Crawford, a battlefield nurse from WWI. Always well-written, filled with interesting historical detail, and completely engaging. This one largely takes place in Paris, where Bess is recovering from a wound. Although I wait eagerly for each precious episode of this series (and its companion series about Ian Rutledge) to come out, I found this one a tiny bit of a disappointment. Everything is as good as always, with characters, plot development, and narration, but the part I struggled with was the premise of the story itself. I felt it was a bit of a stretch that anyone would spend as much time tracking down someone with as little reason (and under wartime conditions) as in this case--the fascination and urgency to find one soldier about whom she had uneasy suspicions. Still, if you don't get hung up on that, it is as good as all the books written by Charles Todd, and I would gladly recommend it!

Better than the last one

Thankfully this was better than the last few. I had been discouraged that the series was fading. I hadn't enjoyed the previous books as much as earlier ones. This one restored, somewhat, my enjoyment of the story of Bess Crawford.

The mystery was interesting. I'm still not quite sure how Bess figured it out. I was listening at night; I might have missed something. I know I missed having more Simon in the story.

The narration was good. Rosalyn Landor is one of my favorites.

Since the war is winding down, Sister Crawford will have a future to think about. I'll look forward to the next book - more than I did this one.

Would you try another book from Charles Todd and/or Rosalyn Landor?

The plot was ridiculous and it was so formulaic and tired that I had to abandon ship about halfway through. Each time the protagonist is on the verge of finding out something important, a taxi suddenly drives by, or some other lame plot device interrupts the progress of the already limping plot. After several dozen of these plot-slowers, and the fact that the protagonist doesn't divulge what she knows about the suspect to anyone, even though it would move the plot along much more rapidly, I felt that listening to the book was about as enjoyable as Chinese water torture.

am a fan of Charles Todd but really struggled with this one...I never could get into the story and the plot seemed too far fetched. I usually enjoy the Bess Crawford tales. I like the mix of mystery and history...WWI and sometimes the Raj. I couldn't sustain an interest in this particular story no matter how many times I tried...starting at chapter one.

he mix of mystery and history

Wonderful story! Performance excellent, story, itself just as always with this series, right on top and the historical setting of the near end of World War I is one of my favorite times.

Not at all up to previous Todd books. No real motivation for plot twists. It seems Todd has run out of ideas. Tedious ... I felt no empathy for any member of this confused story.

Loved it, wish there was more Simon in it, but great story nobe the less.

The Shattered Tree is a tight well written novel. There are lots of plot twists and engaging characters. This is the second Bess Crawford novel I have listened to and I will look for another one

The narrator did an excellent job. The story lagged a bit in the middle. There were way too many trips back and forth to the hospital, and Bess was really much too energetic for someone who was shot and then had to have surgery. However, the ending made up for the other difficulties. It was a bit Pat, but that's typical for this series.

Up to the standard of excellence we've come to expect from this dynamic duo. Doesn't disappoint.