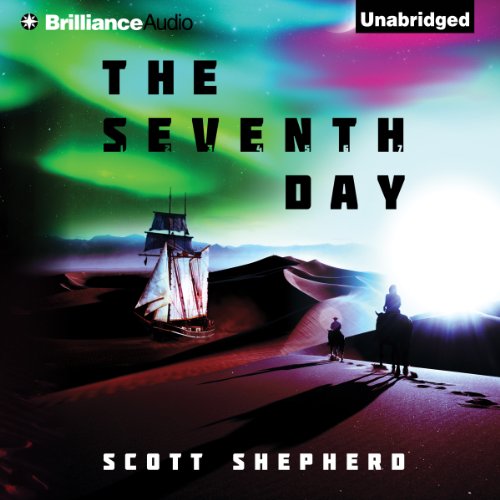 Seven years after the Strangers decimated the planet, Joad is one of the Remaining, the few left unharmed when most of humanity was obliterated. He was halfway around the world when disaster struck and has been trying ever since to get home to Nemo, where he prays his wife waits for him.

Days from his destination, Joad's thrown off-course by four merciless brothers who glide across The Flats in a pirate ship. In his escape, Joad reluctantly gains new companions. Together, they journey through a landscape equally beautiful and haunting, mysterious and magical - including The Fields, the deadly territory between them and Nemo. Filled with hope, horror, and wonder; The Seventh Day presents a world we haven't yet encountered but could just be around the corner.

Author could do with a little research.

So many factual errors it was distracting. One character was about to be executed by electric chair in a state that doesn't use them for a non-capital crime but instead survives months without food... whaaat!? Race horses don't weigh two tons, try about a quarter of that. Male military officers wearing burkas? And what the heck is a "millimeter of an inch"? The story is OK other than when my suspension of disbelief is being shattered by nonsense. Good narrator.

The characters were interesting and the story moved along at a good pace. I definitely read/listen to a sequel.

Started out interesting, left a LOT to be desired

I started out enjoying the story, then it began to drag on and on with unending flashbacks. Finally, some of the overall ideas were a bit frustrating such as:

Aliens aren't called "aliens", they have been universally labeled "strangers". These "strangers" removed most of human life on Earth along with most everything useful by simply using large vacuums (must have been a Dyson). This event occurred seven years ago yet it is referenced as "nearly a decade" (no confusion there). It lest soooo many unanswered questions that I don't even want to bother reading a sequel as I can imagine this to be some drawn out series with no real closure, only more questions.

The story had promise, I just think it could have been refined a lot more.

The scifi level was high enough to keep my hardcore scifi interest, but the storyline and character studies were deep enough to have wide appeal. The emotion or drama seemed a little bit contrived at times, but I don't know if this is targeted to teens (I am an adult). It seems like it could be a great epic movie.