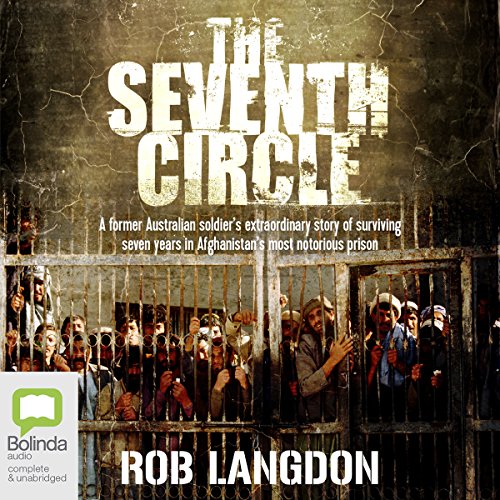 By: Robert Langdon
Narrated by: Nick Farnell
Try for £0.00

Former soldier Rob Langdon was working as a security contractor in Afghanistan when he was found guilty of murder and sentenced to death in a case that would have been ruled a clear miscarriage of justice in the British legal system. His sentence was commuted to 20 years in jail, and he served his time in Kabul's most notorious prison, Pul-e-Charkhi, described as the world's worst place to be a Westerner.

Rob was there for seven years, the longest sentence served by a Westerner since the fall of the Taliban, and every one of those 2,500 days was an act of extraordinary survival in a jail filled with Afghanistan's most dangerous extremists and murderers. In 2016 Robert was pardoned and returned to Australia. In this highly anticipated audiobook, he talks about his experiences for the first time.

What listeners say about The Seventh Circle

Having read a few of these banged up abroad type books I've got to say this story isn't that impressive. The back story involving his military life is interesting but his time inside seems pretty uneventful and the jail itself doesn't come across remotely as hellish as the Bolivian one in Marching Powder for instance.

Easy to follow, hard to put down. For anyone moaning about the Covid lockdown, listen to this.

Honest, engaging and what a story!

Good dude, writes about what it means to be a soldier, a fighter and a CPO on ops with a number of different PSC. Was gutted to hear about Dinks from Olive I had no clue and realiving Stephs incident in Iraq was chilling RIP Viking!

this book was tedious. I have no sympathy for the guy and no interest in his story. The situation was entirely his own making.

this was a tough book from a tough guy. gives a n insight into the prison system in Afghanistan during the war against terror. it's not overly gory and does have some positives but I'm sure this guy suffered hard time the hard way. well recommend.

One of the best books on Afghanistan I've read

Heard Rob on Hostile Operator Podcast and had to buy his book immediately. Absolutely gripping.

Sorry but this is mind-numbingly boring............gave up at chapter 7. Can anyone tell me at what chapter we actually get to hear about life in the prison ?

loved it what Rob went through and to come out the other side and survive is borderline impossible. going to listen to again

Cannot believe that the author thinks he killed in self-defence whilst he was an attacker ! Other than that the book is a bit boring. Not sure how the auhor managed to make such and. nteresting story so dull.

A book to shatter illusions

If you read this book be prepared to find that everything you might have believed about anything is utterly wrong. It’s shocking, harrowingin its way and honest so far as i can judge from what’s written here. However, certain western nations are not painted in a ood light so if you want to remain patriotic and safe then don’t read this book. if you want to see the world as it truly is and recognize that man can still be a cesspit to his own kind well then, go ahead and read it. You won’t be disappointed.