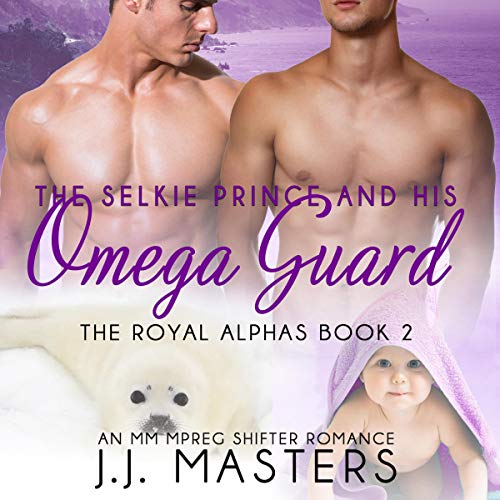 The Selkie Prince & His Omega Guard

An alpha prince ready to find his fated mate. A Selkie who wishes he wasn’t omega-born....

Unlike his brothers, Prince Adrian, the dutiful second-born son to the King of the North, looks forward to finding his true mate and producing an heir. Until he stumbles across a beta guard with an enticing scent.

Del never wanted to be an omega. All his life, he’s only wanted one thing: to serve as a Royal Guard. Though forbidden, he found a concoction to mask his omega scent and was successful until his dwindling supply caused the alpha prince to discover his deception.

Rian not only breaks every cherished royal tradition but ends up hiding Del until he can figure out the reason for the attraction between them. However, one selfish mistake puts them in a precarious position they can’t escape. Their reckless actions have them worried they’ll be banished from the Selkie community. Rian needs a plan to convince his father to accept his mate before he has to risk everything he’s ever known and loved for their future. Because, no matter what the king says, Rian will not give up Del.

Note: A 60,000-plus word, m/m, shifter, mpreg story, this is the second book in the Royal Alpha series. Due to the “knotty” times in this book, it is recommended for mature listeners only. It can be heard as a stand-alone and, of course, has an HEA.

What listeners say about The Selkie Prince & His Omega Guard

As usual the narrator was great! As for the book I thought this one was stronger than the first, and I really enjoyed it. The author seems to have hit their stride and I can’t wait for the next book!

The Selkie Prince & His Omega Guard

I read this story when it was first released. I enjoyed it and was looking forward to listening to the audiobook version. My review contains the same one I originally left when I read it and a new addition for the narration.

This is the second book in The Royal Alphas series and, like the first one, I enjoyed this story. I really liked omega Del and felt bad for him at times. Prince Rian took a little longer to like. He kept putting his foot in his mouth without thinking about the impact on Del. Eventually, he realizes he can't and won't deny his feelings. It just took a long time for that to happen. When it did though, I thought his gesture proved to Del what Rian's true feelings were. I also liked Ford, Prince Rian's loyal beta servant. He was perfect for both Rian and Del. The King and Douglass are both a**es. I really disliked them both and am hopeful Douglass, especially, will get what he deserves.

I liked the narration in book one (by the same narrator) but I liked his narration in this one better. Every character in the story is male, and there's a lot of them. The narrator did an excellent job of making it easy to tell when a different character was talking. He especially did a great job with Douglass, a hoity toity nose-in-the-air type of guy. I wanted to slap Douglass while I was reading and that feeling intensified while listening. I'm looking forward to listening to the next in the series.
*I was provided a copy of this audiobook and voluntarily chose to leave a review. This is my honest review.*

Rian was looking for his Omega and had yet to find him. After a ceremony to look for his omega didn't result in his fated mate. He all of sudden scented his fated mate in the room but it was a guard! Del was an omega who didn't want to be one. He always wanted to be a royal guard so he hid the fact he was an omega.
Once Rian and Del got together Del realized he and Rian were fated mates. However it took Rian much longer to figure out. Once Del is with a pup he changes his mind. This story is filled with excitement and love.
The narrator John Solo is awesome. Another great book by JJ Masters!!

The Selkie Prince & His Omega.Guard is the second book of The Royal Alphas Series . I loved the characters they are well developed and this story has a good plot. I really loved this it has a way of pulling you into the story and keeping involved and excited for the next installment. I thought this series seem maybe be out of my comfort zone but I was wrong I'm so glad I took a chance and started this series I highly recommend you check it out. This series is imaginative, well written, and we'll preformed

These Stories and the continuation of the Royal brothers just keeps getting better and better. J.J. Masters has truly been blessed with the talent of storytelling and writing. I am totally invested in this series. Prince Ryan is a hoot. The voice that John solo gave him definitely fits. in facted, all of his narration of each character's are spot on. I highly recommend this book!

This book was amazing, way better than the 1st in my opinion! I loved the way Rian and Del met. The plot of Del not wanting to be an omega and hiding his scent so he could have the life of being a guard like he had always dreamed was intriguing. Plus, Del kept Rian on his toes and I loved their relationship/banter. The way Del held his own against Rian and presented himself as a strong omega was a fun twist. Sometimes omegas are portrayed as weak but that wasn't the case for this situation and that made the story line so much better! Ford really surprised me as well, I LOVE that he took Del's side and there was a few LOL moments between him and Rian when he was defending the omega. I also thoroughly enjoyed getting to know more about the brothers and the selkie culture. King Solomon and Douglas are still jerks, you get a little more information about the King (even though it doesn't excuse his behaviour), but Dougie douche is still a mystery. I'm looking forward to Zale's story! I received this audiobook in exchange for my honest review.

The story of Adrian and Del had twists and turns I didn’t anticipate. Learning more about the brothers and history was fun. I’m looking forward to seeing where the story goes and hope that Douglas gets his comeuppance.