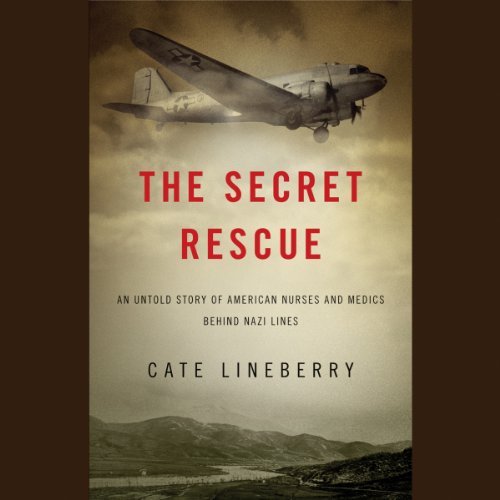 An Untold Story of American Nurses and Medics Behind Nazi Lines
By: Cate Lineberry
Narrated by: Erin Bennett
Length: 8 hrs and 13 mins
Categories: History, Military
2.5 out of 5 stars 2.7 (3 ratings)

The compelling untold story of a group of stranded U.S. Army nurses and medics fighting to escape Nazi-occupied Europe.

When 26 Army nurses and medics - part of the 807th Medical Air Evacuation Transport Squadron - boarded a cargo plane for transport in November 1943, they never anticipated the crash landing in Nazi-occupied Albania that would lead to their months-long struggle for survival. A drama that captured the attention of the American public, the group and its flight crew dodged bullets and battled blinding winter storms as they climbed mountains and fought to survive, aided by courageous villagers who risked death at Nazi hands to help them.

A mesmerizing tale of the courage and heroism of ordinary people, The Secret Rescue tells not only a new story of struggle and endurance, but also one of the daring rescue attempts by clandestine American and British organizations amid the tumultuous landscape of the war.

"Cate Lineberry has unearthed a little-known episode of World War II that has all the elements of a classic escape adventure. Carefully researched and compellingly told, The Secret Rescue is a suspenseful story of courage, audacity, and endurance behind enemy lines. I couldn't stop reading it." (Gary Krist)
" The Secret Rescue is narrative history at its best. Cate Lineberry uncovers a fascinating, long-forgotten drama that captured the world's attention during the darkest days of World War II and transforms it into a gripping story of courage under fire." (Daniel Stashower)

Well-told story of a WWII rescue

This book was obviously very well researched. I listened with my driving companion while traveling on a long car trip and we both enjoyed it very much. I was expecting more suspense, although suspense did build somewhat toward the end. I expected it to be more like "Unbroken," than it turned out to be, but it was still a story that begged to be told. It is hard to imagine how ordinary people can endure so much---It makes me think that Tom Brokaw was right about the greatest generation. WWII history buffs should not miss this book.

Amazing story untold for so long

If you could sum up The Secret Rescue in three words, what would they be?

What was one of the most memorable moments of The Secret Rescue?

The coming together of all the characters.

The US being told they were alive.

WOW I had no idea about this story. I'd like to see more of this genre. I kept going back to hear parts of the story I just listened to so I could continue to see that picture in my head. I actually have recommended it to other women.

Awesome story of survival and perseverance from personnel not normally expected to survive in such harsh conditions. Inspiring story and important historical account.

This information was very interesting. The author chronicled it very well in his book, sharing the experiences with interest. A very good book to listen to.

A great tale of WWII Endurance

I had not even heard of this story of courage, Chutzpah, and endurance in really, really tough conditions exhibited by US Soldiers and Nurses who had to evacuate a downed plane in Nazi-occupied Albania. A lot of Americans forget that there was a lot of fighting in the Balkans during the Second World War. As a military vet and an RN, I found this book by Cate Linberry to be totally engrossing.

The author specifies in the preamble of the book that there is an accompanying PDF, no PDF is available from Audible.

This is a well researched, thoughtful and interesting account of the hardships escaping a forced landing in Axis and opposing local militia faction controlled Albania by 13 female evacuation nurses, 13 male medics and a flight crew of 4; and, of their arduous overland journey to freedom during the Second World War.

Military historians might not be the audience; however, the insight into the inexperience and naiveté of these brave people illustrate how members of the military were pushed into situations that they were neither supplied or prepared properly for.

As this tale unwinds it is severely hampered by the lack of maps, illustration and photographs in that missing PDF.

I bought this book because on of the nurses was from Utah. Not the greatest book on the planet but not bad is you want a WWII story that is a little different. They ran these nurses and Doctors all over Albania before they could get help.

Was not the best book but also not the worst. It's hard to follow along with who is who at times but the story line is worth it to keep listening.

this was written more for a young adult audience. it comes across very immature. also the author puts in one liners about things or what people said and it comes off very poorly and no one cares....

No, unless the friend is a World War II fanatic

Would you listen to another book narrated by Erin Bennett?

The research is excellent but the reader uncompelling and there's too much detail and repetiveness. This story would be a much better listen if written as historical fiction.