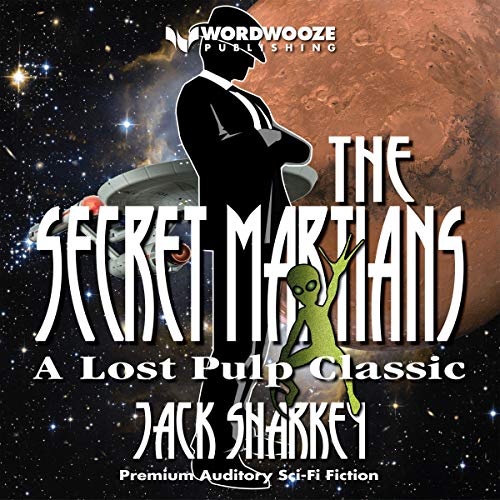 By: Jack Sharkey
Narrated by: Joshua Carver
Try for £0.00

Master spy of the red planet

Jery Delvin had a most unusual talent. He could detect the flaws in any scheme almost on sight - even where they had eluded the best brains in the ad agency where he worked. So when the chief of World Security told him that he had been selected as the answer to the solar system's greatest mystery, Jery assumed that it was because of his mental agility.

But when he got to Mars to find out why 15 boys had vanished from a spaceship in mid-space, he found out that even his quick mind needed time to pierce the maze of out-of-this-world double-dealing. For Jery had become a walking bomb, and when he set himself off, it would be the end of the whole puzzle of The Secret Martians - with Jery as the first to go!

What listeners say about The Secret Martians

This is a fun story to listen to. Funny and creative. The narrator did a great job and has a very nice voice to listen too. I look forward to checking out other books by this author and narrator.

If you want something different to listen to, this is a fun one. It was well thought out. Joshua Carver has a wonderful narrator voice. Very pleasant to your ears.