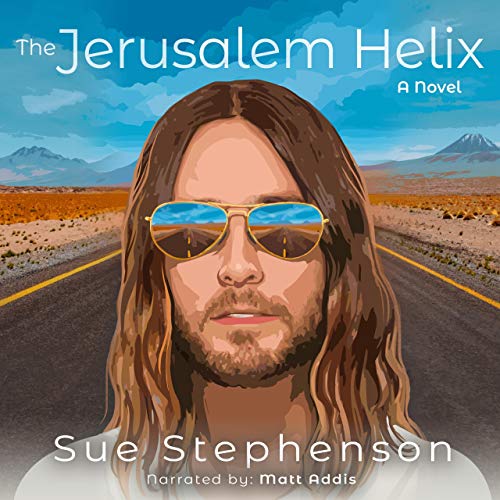 This fast-paced, timely novel of tolerance brings us a young, likeable, John Lennon-type of protagonist who has made the book a hit with listeners of surprisingly different backgrounds. It has also been a great selection for book clubs all over the country.

The story is reminiscent of such thought-provoking classics as Siddhartha (Hermann Hesse) and The Alchemist (Paolo Coelho). Christ’s DNA is discovered in an ancient relic - and secretly used to create a boy. He is never told the truth about his conception. Who will this young man be exactly? How will we react when he leaves his sheltered childhood, enters our modern world, and meets the Pope, the Dalai Lama, and people of all religions?

Expertly narrated by actor Matt Addis, whose luxurious voice and amazing variety of accents bring the story to another dimension.

Note: This edition has a new title.

"You can tell a good writer... The wit, the pace, the emotional impact. Sue Stephenson's got it all." (Robert Ferrigno, author of twelve novels)

What listeners say about The Jerusalem Helix

Entertaining listening on my quarantine walks

Not my usual genre, it was recommended by a friend. Enjoyed the unusual and intriguing premise, the humor and storytelling, and luxurious narration.

I really enjoyed this novel and highly recommend it for its imaginative story. It is both well written and well read; has a good pace; and the vivid descriptions and interesting characters which bring scenes to life all contribute to it being an intriguing and absorbing story. Well worth listening to or reading for yourself!

Creative and witty story which makes you reflect on tolerance so needed these days. I really enjoyed all the various accents; they really added to the story!

Such a intense and admirable story!

“This book could not have come at a better time, and it’s my top recommendation to anyone who complains they’re bored during the quarantine. Stephenson’s book is not only entertaining but completely original, while still being respectful of all religions and beliefs. Her characters are well rounded and the writing is transporting. The actor performance in the audiobook was really entertaining his French accent for the caractère of Cherie was delightful, I’m French myself I can relate to it. What a wonderful world to get lost in during this crazy time we’re living in!”

Fascinating What If Story

I almost dismissed this book as being another modern day religious fiction but I am glad I didn’t. This is a current secular novel so don’t be put off by the subject or title. The story was engaging, thoughtful and provocative. the narration was fantastic. I highly recommend The Secret Jesus and can’t wait to see what Sue Stephenson comes up with next.

The Secret Jesus is fast-paced and full of memorable characters. And it will make you smile. It combines depth of character with an intriguing plot. If the news of late fills you with a heaviness, this story will take you somewhere else—and leave you feeling somehow brighter. It should be added that the actor narrating the story does a smashing job with the accents, including a smoky female Italian voice that will make you chuckle.

The Right Read for This Moment!

The Secret Jesus is exactly the right antidote to the disruption, distress and chaos of this unprecedented moment in our history. The Secret Jesus speaks to universals in the midst of upheaval; read with a calm, soothing tone, the Secret Jesus melds science and theology to deliver an uncannily relevant message. The Secret Jesus sees transcendence in the most quotidian of details and invites readers to do the same. Stephenson's skillfully crafted narrative weaves religion, spirituality, and science into a seamless web. If everyone were to sit back, close their eyes, and simply listen to this mellifluous reader and spellbinding story, much good would come from the ensuing decrease in our collective anxiety. I strongly recommend this book to everyone, especially now.

The story has a wild premise and kept surprising me. The writer has wonderful storytelling ability. The final chapters are hair-raising and it finishes with a powerful message. The narrator is superb. A good read!

I cannot recommend this novel enough. Cinematic in scope, deeply personal in nature, and truly captivating. The story digs deep and challenges you, and Sue Stephenson's writing evokes a deep sense of place and wonder. The narration is equally brilliant and adds another dimension to the novel, and I highly recommend one as a companion to the other.

A great escape and a great story

Audiobook read like a good Netflix series. Loved the hero’s personality: strong, steady, earnest, and humble. His adventures, travels, and the characters he met were amusing and clever. Had insomnia at 2 am and couldn't resist listening. A wonderful narration voice. Loved it!