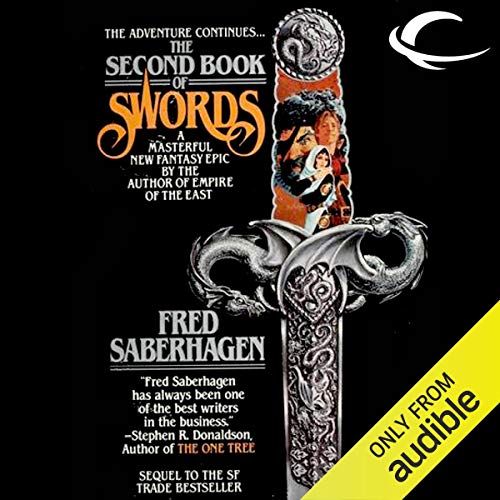 The Second Book of Swords

The Second Book of Swords

Mark and Ben travel deep into the Blue Temple's hidden horde of treasures in an attempt to recover gold and Swords for Sir Andrew. Gods, demons and human traitors have other plans for the Swords and for the adventurers. When playing the game of the gods no one's survival is secure, even a god's.

I would recommend this book with caution. It is the continuation of book one and it must be read in order to go on to book three, however, it was slow and I had to make an extra effort to stay interested.

If you’ve listened to books by Fred Saberhagen before, how does this one compare?

Great voice overs for each character. Rise and fall of tone to make for interest. Some of the characters could have used a little more powerful voice based on their descriptions but overall I still think he was excellent

Do you think The Second Book of Swords needs a follow-up book? Why or why not?

Sure it needs a follow-up because the story is not over. There hasn't been a resolve to the whole scheme of things yet. I just hope the last book holds more interest.

Would you consider the audio edition of The Second Book of Swords to be better than the print version?

I only read as an audio book, Although i think the simple style lends itself well to that format.

The villains were my favorite part of this story.

Which character – as performed by Derek Perkins – was your favorite?

Again all the voice acting was quite well done. Subtle but unique differences between characters.

I thought this book much like the first was a great story. Modern fantasy has a tendancy to get very complex with hundreds of strange names and places. I found the story to be more like the myths of Greek mythology. I was a bit disappointed in the ending of this one. It fleshed along this great story for the characters then felt like Saberhagen ran out of room and had to quickly tie everything up in 3 chapters. The ending felt very rushed and left me wanting.

great fantasy read the first one

Not as good as the first book in the series but...

The Second Book of Swords was not as interesting as the First Book. The book felt rushed for some reason. I will listen to the Third Book to see how Mr. Saberhagen wraps up the trilogy.

for me these books are a trip down memory lane I remember some 15 years ago purchasing the hard copies from a bookstore on just a whim because the name sounded cool. I remember being in France in this fantasy story land of magical swords and scheming gods that were playing a very cruel game. if nothing else the song of swords will catch you in a trance and have you humming it or sing it all the time having found these books on audible after so long it was hard not to purchase damn and hear the stories come alive again

Great Characters in this Book

Where does The Second Book of Swords rank among all the audiobooks you’ve listened to so far?

For fantasy & adventure, I'd say that this ranks as an easy yet provocative listen. The story is clear and the characters are carved from a who's who in archetypes. Just the type of story that you'd imagine an old storyteller would spin while laying back in front of the fire and just letting your imagination be guided by a purposeful story. No wandering here and clearly everything you'd want from a quest including friendship, betrayal, intrigue, twists, timely visits from the gods that are a far cry from deus ex machina, lost and found, etc. Just short of a real myth!

Mitspieler has got this hands down. This book was populated by a slew of supporting "roles" that gave a lively feel to the main plot, but Mitspieler rocked (no spoiler from me) with a show of prudence and cunning that ultimately became the entire opposite...how even the wisest often make decisions based on their emotions...

Narrator took on various roles and voices, but an older or another voice would have helped in scenes where the listener might have to wait a bit to find out who is speaking/has spoken

No laughing or crying here. Just a healthy adventure with twists and turns

Well worth it for fans of Lord of the Rings and Game of Thrones. In fact, right up in the same league...yet different, as all books should be

Better than the first.

This feels like it was a small subset of another book. Maybe it's because I've read Mistborn, Stormlight Archive, and The Wheel of Time. Maybe it's because the book is part of a three part series. It seems like a YA book written for adults. It's hurried and hollow. I don't feel any connection to the characters except Ben, and their reasoning for their quest is shallow at best. I only gave the story such a high rating because it's better than the first.

Did Derek Perkins do a good job differentiating all the characters? How?

Could you see The Second Book of Swords being made into a movie or a TV series? Who should the stars be?