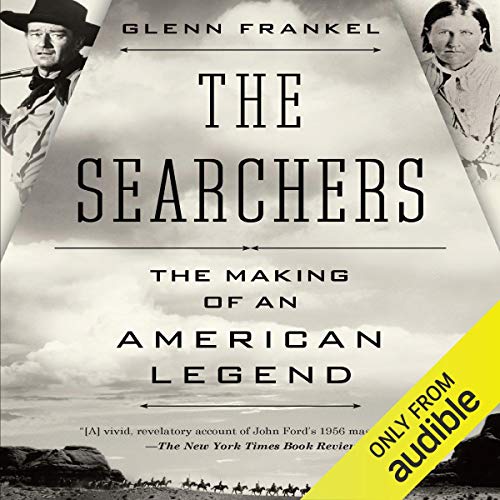 In 1836 in East Texas, nine-year-old Cynthia Ann Parker was kidnapped by Comanches. She was raised by the tribe and eventually became the wife of a warrior. Twenty-four years after her capture, she was reclaimed by the U.S. cavalry and Texas Rangers and restored to her white family, to die in misery and obscurity.

Cynthia Ann's story has been told and re-told over generations to become a foundational American tale. The myth gave rise to operas and one-act plays, and in the 1950s to a novel by Alan LeMay, which would be adapted into one of Hollywood's most legendary films, The Searchers, "The Biggest, Roughest, Toughest... and Most Beautiful Picture Ever Made!" directed by John Ford and starring John Wayne.

Glenn Frankel, beginning in Hollywood and then returning to the origins of the story, creates a rich and nuanced anatomy of a timeless film and a quintessentially American myth. The dominant story that has emerged departs dramatically from documented history: it is of the inevitable triumph of white civilization, underpinned by anxiety about the sullying of white women by "savages."

What makes John Ford's film so powerful, and so important, Frankel argues, is that it both upholds that myth and undermines it, baring the ambiguities surrounding race, sexuality, and violence in the settling of the West and the making of America.

What listeners say about The Searchers

Enjoyable, but not entirely cohesive

I enjoyed listening to this audiobook, and would recommend it, with the caveat that it doesn't exactly weave the subjects together quite as neatly as is suggested in the summary. The first half of the book almost exclusively deals with the captivity narrative. It's interesting research, but just slow to get to the film. A few chapters of biographies for the main players, LeMay, Ford and Wayne (We learn a lot about Stagecoach), is also quite entertaining. And finally a few chapters of the film itself, which reads a bit more like production notes at times. Again, all very engrossing, but the promised exploration into American myth making and how the film "upholds the myth and undermines it", is rather thin.

I liked the accounts of interactions between John Ford and John Wayne, somewhat abusive on Ford's part. I think that could have been a fair book in itself. But mostly, I liked the stories of being on the set of the film itself.

It was a solid performance.

As it's a book about a film, it probably wouldn't happen. But, if it focused on the relationship between Ford and Wayne, perhaps spanning their careers, I might be interested.

As mentioned, it was an enjoyable listen, but didn't have the same impact as another book about filmmaking by Glenn Frankel, "High Noon: The Hollywood Blacklist and the Making of an American Classic". Maybe because that book was mostly set within the same time frame, the overriding cultural theme was more cohesive.

The Searchers has long been one of my favorite films. It may seem a throwback to old-school movie-making but its iconic and mythic value should be appreciated by anyone enamored of filmmaking or cinema history. The wonderfully researched book covers all the angles: a history of the Indian Wars, Western mythmaking, capture narratives, author Alan Le May, screenwriter Frank S. Nugent, the film's casting, production, and, of course, colorful information on John Ford, John Wayne, and the rest of the great cast.
Most importantly the story and legends of Cynthia Ann Parker, Peta Nocona, and Quanah Parker (on whose the story is loosely based) are given a full airing. Author Frankel begins with their tale in a full historical context bookended by a wonderful epilogue of the Parker family today.
If you want to dive deep into the full context of how the truth became a legend and became a book adapted into a film classic this book is a feast. The complicated history and the creation of western mythology and of the film in the context of Ford's late-career and Hollywood in the mid-50's are fascinating. The book is long and detailed but never feels gratuitous.
The Searchers audiobook was also a great follow-up to The Big Goodbye: Chinatown and the Last Years of Hollywood, another covering a single film. I also just finished the audiobook for News of the World, another "capture narrative", albeit fiction, which was also followed by a movie.
The narrator, however, almost had me returning it. But I got used to him because I like the book so much. His voice is clear and resonant but he inflects every sentence the same way. The punctilious sameness becomes maddeningly robotic. When he has to speak as a character, the "acting" is just awful. I checked him out and saw that this reader gives classes in voice-over technique. Being an actor myself, I recognize his strengths but the man really ought to put more variety into the reading. We don't need to train a generation of robot readers!