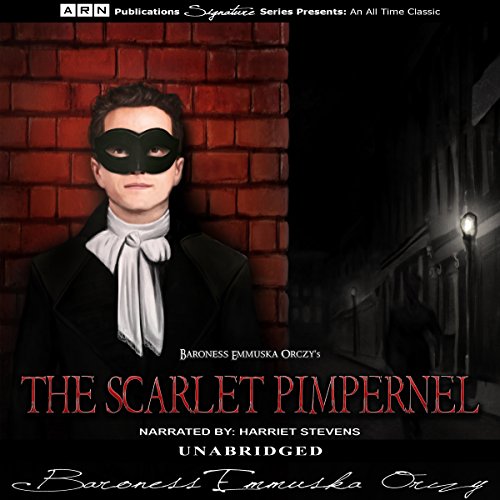 By: Emmuska Orczy
Narrated by: Harriet Stevens
Try for £0.00

A band of English Noblemen, led by the masked Scarlet Pimpernel, secretly conspire to rescue French noblemen from the guillotine of French Revolutionists. The French army offers 5,000 francs for the Scarlet Pimpernel, who is quite sneaky in his means to free these mostly innocent men.

Rumor has it that the Scarlet Pimpernel has super powers which aid him in evading capture along with his team of men. The Scarlet Pimpernel lives a double life, one as an English aristocrat, wealthy, and popular among society's elite, and another at night when he becomes a superhero and master of disguise to the French nobles he has vowed to save. To others, such as the revolutionists, he is something darker, and dangerous - a vigilante who must be captured and stopped at once.

A love story deepens the mystery of the Scarlet Pimpernel even more, as a beautiful young wife will have to choose between her husband and her brother with his demands to discover the identity of the vigilante or face dire consequences. The Scarlet Pimpernel goes to great lengths to show that the mask you wear on the outside is not always an accurate depiction of who you really are on the inside.

What listeners say about The Scarlet Pimpernel

Could not listen to this. I love the story but terrible narration. Do not buy this!

This is a story worthy of a much better reader. It is incredible how many common words the reader seems to be unfamiliar with. Didn’t anyone explain that she could spend an hour or two preparing before blundering in? It isn’t limited to historical or foreign terms which I might, just, have been able to forgive. The accents are also dubious at best though this is somehow not quite so annoying. Readers rarely match the voices you initially expect for known characters though usually you become used to them; here they constantly grate. I kept going to the end solely due to the story, endeavouring to keep my cringing to a minimum. Please could somebody more qualified be found for the Scarlet Pimpernel series?

Not a performance, just a reading

I have to agree with the first reviewer of this audiobook. The "performer" lets down the story with a rushed delivery - more a reading that has to be done and finished with than a performance. I'm afraid that I gave up about a quarter of the way through. It's a pity as I already had a version of this book performed by David Thorn (who does a much better job), but as half the story is seen through Marguerite Blakeney's eyes I had thought a woman performer would be more appropriate. I also wonder about Steven's pronunciation of Blakeney: "Blake-en-ee" whereas most would say "Blake-nee". I think I will return this title and stick with my Thorn version.

After watching the three part video, I was disappointed in the original story. My error.