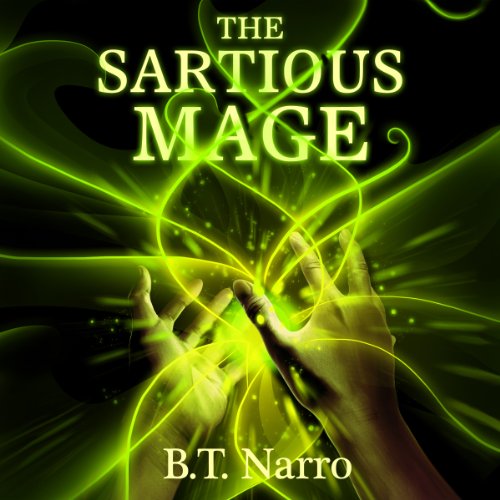 At just seventeen years old, Jek Trayden's power with Sartious Energy could be the greatest in the world, but that power comes at a price - a darkness within him that attacks while he sleeps, producing nightmares so real they leave him bruised and bloody.

With the attacks worsening, Jek can't refuse an opportunity to end his nightmares for good when the King promises him a cure in exchange for a task.

But after the King's true intentions are revealed, Jek finds himself in a fit of rage, stealing the King's fearless and livid daughter from the palace - on her wedding day - and fleeing the city with the wrath of her father on his tail.

Jek's about to find out there are some things in this world worse than his darkness.

What listeners say about The Sartious Mage

Good book and easy to get into. Dissappointed to see that the narrator changes for future books though. In fact, out of the six books in this series there are 4 different narrators. Makes it difficult to follow the series as accents and pronunciation is so different 🙄

Wonderful next addition to a great series

Would you consider the audio edition of The Sartious Mage to be better than the print version?

Yes, Nigel Patterson does a great job narrating. Since starting the 2nd addition to the series, he provides the voice I've come to associate with the series.

I really enjoyed the additional elements the author adds as the book goes along. It keeps me interested and entertained throughout the book.

Yes... but I don't think it'd be possible given the length of this book.

I'm looking forward to the rest of the series, but noticed there are new narrators in the next few titles. I hope they are just as good as Nigel for this series.

I love this book. The love story is cute, the character are fun, and it has a great ending. Out of the Rhythm of Rivalry series this is my favorite. And I find myself listening to it again and again.

Great story. I love the characters. I didn't stop listening until the end. I can't wait to hear the next book in series.

The book gets off to a promising start. I liked the character of Jek and his anger at being cheated by the evil King. His escape from the castle was exciting with the promise of more action and character development to come. Unfortunately, then the princess enters the scene and after that the story grinds to a complete halt. Plot is replaced by juvenile bickering between Jek and the Princess. Jek alternates between admiring her breasts, and her hair, and her eyes, and her soft skin (are you bored yet? I was), etc etc, while the Princess showers him with scorn and anger and admonishments not to fall in love with her - excellent advice in my opinion. He ties her up and gets her filthy, then releases her when she promises to help him, then ties her up when she breaks her promise, then releases her etc etc etc. At that point I admit I gave up. Too bad, this could have been at least a decent story.