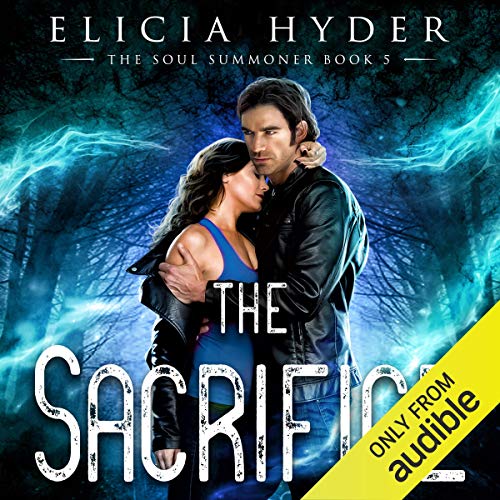 By: Elicia Hyder
Narrated by: Brittany Pressley
Try for £0.00

There's only one being on Earth who calls Sloan Jordan by that name - her biological mother, a demon named Kasyade. So why did she answer Sloan’s best friend’s phone? When Sloan reaches Adrianne Marx’s apartment to investigate, all she finds is a half-written list of things to do before Sloan’s wedding:

That's where the to-do list ended. Mid-sentence with a scrawled line like Adrianne had been dragged away from the task. If Kasyade was involved in the abduction, Adrianne probably had been.

The price? Sloan’s unborn daughter, the most powerful angel in all of history.

But hell can’t rival the fury of an angry mother protecting her child, and until the baby is born, her incredible power is Sloan’s to wield. Now the prey becomes the predator as Sloan seeks to put an end to Kasyade forever.

What listeners say about The Sacrifice

I dont tend to write review's but i had to on tjis series, it had me laughing and crying and eishing it would not end, highly recommend them..

narrator was excellent. the story kept flowing. the characters where strong. I enjoyed this series.

Where Is Adrianne? Also, last of the best narrator

Adrianne is missing so the gang go on a hunt to find her, it is just as action packed and suspenseful as all the other books. The only sad part is this is the last one Ms. Presley narrates until she co narrates a book in the end. This is the last book with Sloan as our POV and then we go on to a new world with a new narrator. This is definitely the last book I should’ve read in this series before moving on. The next narrator is a HUGE letdown FYI!

This was not the ending I expected! It was a great end to the book but not an end to the story . It will be interesting to see where the author goes from here. This really is such a great series and I highly recommend

The story is Great!!
Brittany makes the story even better!!!
She brings each and every character, no matter how small, to life.

When an author can make you laugh, believe in love and cry out loud with what they what they write you know it’s a grea book . This one is all that.

The Sacrifice had unbelievable details and touching love story all wrapped up with fantastic narration! Best in the series... so far!!

Every possible emotion was hit!

I have been listening to the entire series at work. This is the second time I listened to the whole series in a row.
I love everything Brittany Pressley narrates.
The story was captivating, there were times I would just sit in the car and listen. Just an amazing story line, a connection was built to every character. Wow

Brittany Pressley does a wonderful job telling the story! Once again I say that Elicia Hyder is a master with words. I loved this book as much as all the previous in the series. The fight between good and evil, the battle is mind blowing. I am going to dive into the next book as soon as possible. I don't want the series to end. I love all the characters and can't imagine the exciting rest of the story to come!! Sloan, Nathan and Warren are so great and all the supporting characters just really give so much to the stories. I laughed, cried and repeat once again. Emotional rollercoaster sometimes at least for me. It's action packed in places and just has a little bit of everything. If you haven't read or listened to any of these yet, you really need to!!!

There are some books that are simply transformative and make you feel as if you’ve become a part of the narrative. You develop attachments, feelings, and thoughts about the characters. When you finish, despite having no more ogre to read, your mind continues to invest energy into the story. Your emotions are tied to the plot.

That is what Elicia Hyder accomplishes in The Soul Summoner series! Each book takes you deeper into the abyss of Asheville, NC, the spirit world, and every inch of Sloan Jordan’s captivating mind.

She leaves you wanting more.

Holy crap!! I was trying to take my time in reading this series since I don’t know if this is the last book but man was it good!!
At times I wanted to slap Sloan and knock some sense to her but man it was good. It was a tearjerker for sure. I hope there will be more.
I also enjoyed listening to it on audio. It was great!

I enjoyed the series immensely! Exciting, funny, touching, and steamy. Everything in one! Couldn't stop listening.