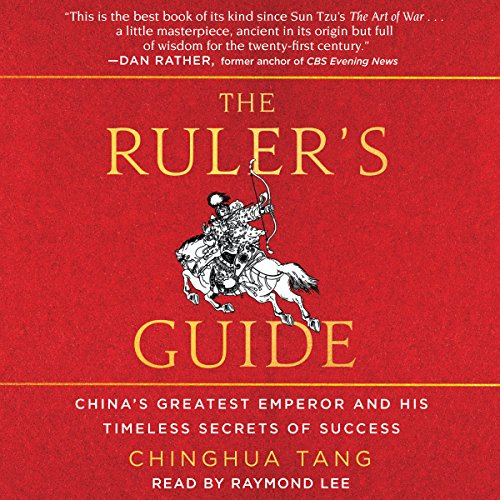 In the classic tradition of Sun Tzu's The Art of War, here for the first time in English is the timeless wisdom of China's greatest emperor, Tang Taizong (AD 598-649), which will show anyone who leads or manages how to achieve unparalleled results and an enduring legacy.

Tang Taizong was arguably the greatest emperor in Chinese history. In Asia many historians rank him with such rulers as Augustus, Genghis Khan, and Napoleon. When he founded the Tang dynasty, Taizong was only 28 years old, and his chief accomplishments were on the battlefield, where he personally slew 1,000 of the enemy. Ultimately Taizong would defeat the descendants of Genghis Khan's Huns, enact a vastly simplified code of laws, open up the Silk Road trading route, create a golden age of cosmopolitan culture, and, by his attitudes on religious tolerance, introduce Buddhism into Tibet and invite Catholicism into China. His dynasty would last 300 years.

The Ruler's Guide is the first publication in English of the leadership principles modeled and articulated by this unusual ruler, who populated his court with advisors who were required to criticize him on a daily basis. Taizong's dialogues with the wisest of his counselors form the core of this book, which is a manual for managing in any sphere, whether it be government, business, the military, athletics, philanthropy, or even parenting. Here, author Chinghua Tang presents conversations between Taizong and his advisers that explain how to attain self-knowledge, evaluate people and appraise talent, lead effectively, grow power and influence, compete with rivals, listen to others with different views, treat subordinates, enhance organizational effectiveness, practice the art of war, achieve long-term success, draw lessons from the rise and fall of great empires, and craft one's legacy.

What listeners say about The Ruler's Guide