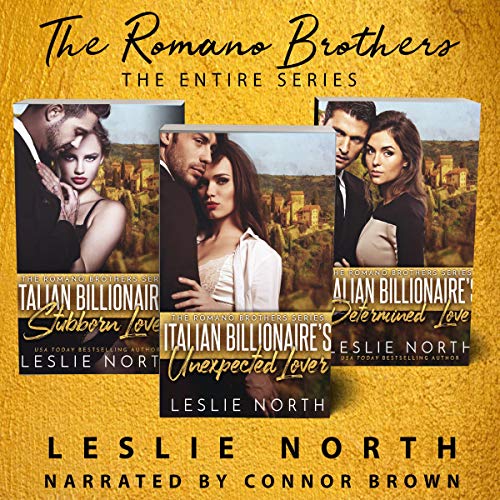 Luxury real estate agent Adeline Peluso came to Italy in search of adventure. Inheriting an apartment with a view of the coast in Sicily sounded like something out of a movie, but after two years watching a resort she’d always loved fall to pieces she’s ready to throw in the proverbial towel...that is until one of the owners finally walks into her office. Tall, dark, and devastatingly handsome, the man would drive her crazy with his arguments if he didn’t set her aflame with his kisses.

Billionaire Nicolo Romano is a global citizen. He’s the kind of guy who skis in the Alps, snorkels in the Caribbean, and enjoys the lights of the Vegas strip on a whim. He has no desire to be tied down any time soon. So when he and his brothers inherit the family resort, Nicolo has one goal: Sell it and sell it fast. But coming back to the place he loved as a child to find a woman who feels just as passionately about the crumbling hotel throws him. Instead of using his business savvy to sell fast, Nicolo is wooing this woman with his island, slowly falling back in love with the place himself.

Luciana Vivaldi rushed to Italy to care for her niece after the death of her sister and then fell in love with the culture and people. Beautiful and whip smart, she’s been recruited to keep the Romano Resort’s hunky structural engineer focused and to take him to task if he doesn’t follow his own directives. She’s got a passion for organizing and no time for romance - that is until a kiss following a falling foundation has her doing the one thing she can’t afford: falling for her boss.

Leonardo Romano has made an independent fortune as a boutique hotel magnate. He has the golden touch when it comes to creating luxurious accommodations, but the one thing Leonardo has avoided is following in his grandfather’s footsteps. Running the family’s original hotel, the Romano Resort, on the island of Sicily is a job he’s never felt fated to revive. However, now that his brothers have done their parts in securing and remodeling the hotel, it’s up to Leonardo to do what he does best: entice visitors to revel in the lap of luxury.

What listeners say about The Romano Brothers Series, 3 Book Bundle

I had a hard time getting into the stories. I finished the 1st book and got halfway through the 2nd but nothing stuck. I cant tell you the characters names if asked, other than the last name cause that's in the title. The narrator was actually pretty good. I enjoyed his voice and his accents were not too bad either.

*edited to add this*
I tried to listen again while in a different mindset / time of day to see if that would help me finish these. Unfortunately my opinions have not changed. But I did notice that I think I tuned out quite a bit cause their names are said SO often. If they are the only ones in a conversation than its not needed to point out the name of the people so much. I can understand a few times but it was overdone and made my brain shut it out.

I got this arc via audiobook boom and this is my voluntary review. I read these individually and enjoyed them. Nice to listen to them back to back.

North drops readers in the middle of a dream. Beautiful views brought to life by descriptive imagery. Attraction that has roots in spellbinding history and a majestic building that holds the key to love, life and legacy. Ancient ruins and modern romance are at the helm of another Leslie North stunner. Fiery personalities, heated attraction and emotional upheaval, make for a turbulent roadway to love. Sexy with a sensitive edge make for a sultry experience.