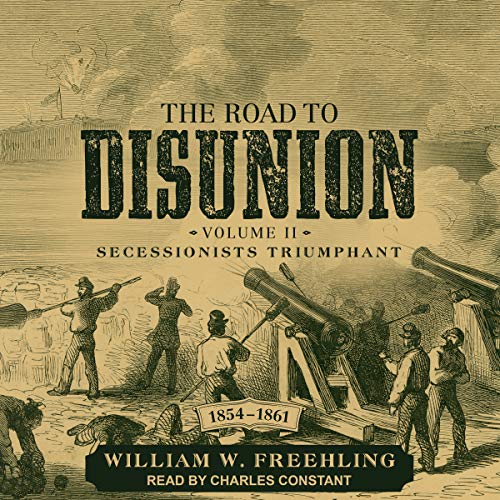 The Road to Disunion Volume II

Here is history in the grand manner, a powerful narrative peopled with dozens of memorable portraits, telling this important story with skill and relish. Freehling highlights all the key moments on the road to war, including the violence in Bleeding Kansas, Preston Brooks's beating of Charles Sumner in the Senate chambers, the Dred Scott Decision, John Brown's raid on Harper's Ferry, and much more. As Freehling describes, the election of Abraham Lincoln sparked a political crisis, but at first most Southerners took a cautious approach, willing to wait and see what Lincoln would do - especially, whether he would take any antagonistic measures against the South.

But at this moment, the extreme fringe in the South took charge, first in South Carolina and Mississippi, but then throughout the lower South, sounding the drum roll for secession. Indeed, The Road to Disunion is the first book to fully document how this decided minority of Southern hotspurs took hold of the secessionist issue and, aided by a series of fortuitous events, drove the South out of the Union. Freehling provides compelling profiles of the leaders of this movement - many of them members of the South Carolina elite. Throughout the narrative, he evokes a world of fascinating characters and places as he captures the drama of one of America's most important - and least understood - stories.

The long-awaited sequel to the award-winning Secessionists at Bay, which was hailed as "the most important history of the Old South ever published," this volume concludes a major contribution to our understanding of the Civil War. A compelling, vivid portrait of the final years of the antebellum South, The Road to Disunion will stand as an important history of its subject.

What listeners say about The Road to Disunion Volume II

In this day and age of vilification and judgmental dictums, this really should be required reading/listening for all who wish to understand how we got to where we are. Things are never as simple as they are billed and sold, and this book - while very lengthy - is quite thorough in explaining the many and critically important nuances necessary to truly understand how we came to Civil War. It is rather dispassionate and academic, but the points made are important to know about the many south’s that actually existed and were fused together imperfectly and retained many dissents.

Only complaint would be the narration speed (I had to go to 0.75) and the over-focus on certain states and the near absence of info on others (my own NC among the latter). But if you truly want to understand “how it came to this,” Freehling’s two works are essential.

This is the complex but essential story of secession. Wow, Freehling's words through Constant's voice unwind some of the difficult concepts of a diverse Antebellum South.

The book is bad

It’s slow and boring
About the country’s impending warring