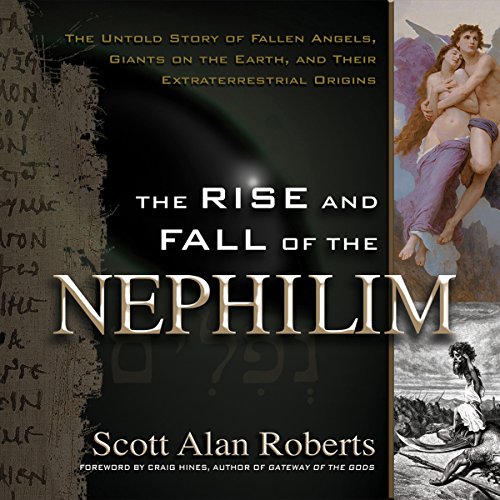 The Rise and Fall of the Nephilim

The Untold Story of Fallen Angels, Giants on the Earth, and Their Extraterrestrial Origins
By: Scott Roberts
Narrated by: Charles Bice
Length: 7 hrs and 39 mins
Categories: Religion & Spirituality, Non-fiction
3 out of 5 stars 3.2 (6 ratings)

The Rise and Fall of the Nephilim

The ancient books of Genesis and Enoch tell us that sprit beings known as the Watchers descended to the Earth, had sex with women, and begat a hybrid race of offspring known as the Nephilim. Such tales are as old as humanity itself. These histories and accounts of visitations and subsequent mixed-blood, alien-human races comprise the bulk of the world's myths, legends, religions, and superstitions.

The Rise and Fall of the Nephilim examines:

What if the old spiritualties and religions weren't just legends?

What if there was something living and breathing beneath the surface, a tangible interlinking of religious thought and spirituality, science and myth, inter-dimensionality, and cold, hard fact?

Worth listening to but a little repetative

In a couple of hours of easy listening I can quote a number of references to biblical accounts of Angels and Robert's theories linking these descriptions to Alien intervention.
Do I agree with his argument.. There is no evidence except that the Bible is probably based on older mythology. Interesting on a number of levels but is this mythology fact or ancient political and science fiction?

Good information to much repetition

The information in this book is fantastic. There was much that I hadn't heard before and some that correlated with other books I had read recently. I would recommend this to anyone that is interested in the Nephilim and giants.

As to the correlation with UFOs and Aliens today, I was left wanting. The argument for that theory was not delved into but left as kind of a sideline, barely mentioned. Additionally, there we're quite a number of times that the same sentences were repeated word for word across various different chapter which got a little old at times.

I found the narration to be a little bland and textbook like. Somewhat like a professor droning on in a lecture.

All in all though I found the audio book to be interesting and entertaining, it kept my rapt attention and made the recent long drives commuting back and forth go by quicker. I almost looked forward to the drives just so I could listen to the book.

Was it destiny for me to read this?

What did you love best about The Rise and Fall of the Nephilim?

I have to say that I initially ordered this book thinking that it might be a fun and entertaining read, but hardly expected it to have any more impact on me than that. I thought it would be like reading some fantasy fable sort of material. Never did I realize it would have such a profound eye opening effect. It was like a person who lived trapped in a house with no windows. One day this person finds a door, opens it and realizes "My God there is a whole other gigantic world out there that just doesn't involve this house. You then begin to realize that this world involves not just millions and millions of other houses but other things that you don't even know how to describe, oceans, forests, mountains, deserts, multitude of creatures and animals. Yes, your house is part of the world, but just a very small little piece of it. The realization is both exhilarating and depressing at the same time. You begin to realize that humans basically are the equivalents of two year old toddlers in both knowledge and also in believing it is all about us and that everything revolves around us. The self centeredness, self importance and grandiosity that we have been imbibed with, especially in the monotheistic religions, begins to melt away and at first we may not be comfortable with understanding our new humility that begins to set in. We also begin to understand that maybe everything is not preordained.True, the forces of good seem to have the upper hand. I still believe good wil eventually triumph, but you begin to see that our opponent can be tricky and very cunning and appears to have made God go back to the "drawing board" at times to tinker with his plans and ideas. This seems to make sense too, because Christianity to me never seemed to address the conundrum of why an all loving God would not just eliminate the devil. Like the author hinted, maybe there is a historic battle of good versus evil taking place.Maybe our destiny is to hopefully aid God in some small small way in this epic battle. Perhaps things are not like a Brady Bunch episode where we all know that everything becomes righted in the end without even finishing the episode. This book has totally shaken up my world. It is basically all I have been thinking about for the last week.

I enjoyed reading this greatly. It raises more questions and perhaps is sending me on a new quest for knowledge. And of course the study of the Bible in great depth.

I don't even know where to begin. I thought this was about Nephilim... It is more a retelling of Biblical history and then some wild reaching and assumptions about God. The double seed theory is promoted, which if you don't know, it puts forth the idea that Eve's sin was NOT about a simple act of disobedience but rather that she became impregnated by the Serpent. He even calls Cain a Nephilim whereas the bible NEVER speaks this. Don't waste your time on this novel.

This is another attempt at making UFOs and aliens the gods of the world. He was taking scripture out of context and out of its true meaning to come up with his “facts “

Interesting to say the least

It seems a bit repetitive at times, but overall I enjoyed listening to this book. Compelling, thought provoking, and an interesting take on the subject matter.

I felt I was listening to a compilation of the most bizarre/rare/debatable passages taken from the bible and non-canonical books. The author however did not add much insight to these passages. Instead he brings each one of them to our attention with the purpose of making us think and draw our own conclusions. I’m glad I read the Genesis and the book of Enoch before I listened to this; otherwise I wouldn't have understood it. I felt angry at times because not much additional information was given, I wish the author would have at least offered more… He did a lot of research though, I can tell he spent time going over their history. I wouldn't recommend this book for Christians as it touches a lot on passages from non-canonical books, Alien theories, secular history and non-factual stories. Interesting to listen to nevertheless. I also picked up a couple of new Ideas and concepts I didn't know about.

A work of indulgence

The author was constantly critical of biblical thought while often in the same breath using biblical narrative to back up his lagging thesis. If he would have avoided this I might have enjoyed the listen.

What was most disappointing about Scott Roberts’s story?

The author has a way of using sources that leave out much of the contextual framework from which he is basing his thesis. There is little uniformity to his presentation which makes it hard to follow, and at times it is easy to forget what point the author was trying to make. The author also seems to have disdain for anyone that has a different idea or thesis then his own. All in all, the author comes off as arrogant and patronizing.

The narrator did fine work.

Mostly disappointment. He was very hostile to other ideas that, I might add, have far more proofing then his own work.

Could have been shorter. To much repetition.

I was disappointed. I understand what the author was trying to say but each chapter is a repeat of information said in different ways or viewpoints. eventually you get lost in all the gibberish, but don't worry, because it'll be repeated for you over and over and over and over....