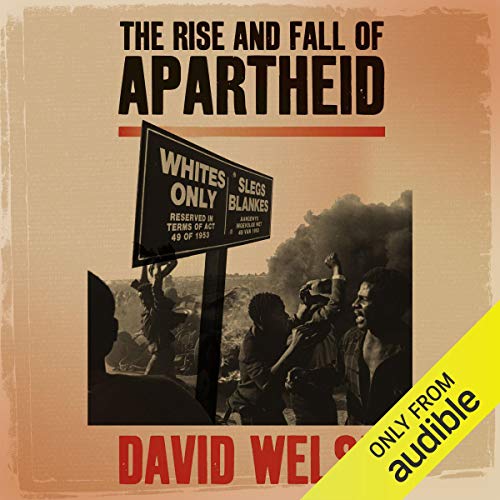 The Rise and Fall of Apartheid

By: David Welsh
Narrated by: Gary Rundle
Try for £0.00

On his way into Parliament on 2 February 1990, FW de Klerk turned to his wife, Marike, and said, referring to his forthcoming speech, 'South Africa will never be the same again after this.'

Did white South Africa crack, or did its leadership yield sufficiently, and just in time, to avert a revolution? The transformation has been called a miracle, belying gloomy predictions of race war in which the white minority went into a laager and fought to the last drop of blood.

Why did it happen? In The Rise and Fall of Apartheid, David Welsh views the topic against the backdrop of a long history of conflict spanning apartheid's rise and demise and the liberation movement's suppression and subsequent resurrection.

His view is that the movement away from apartheid to majority rule would have taken far longer and been much bloodier were it not for the changes undergone by Afrikaner nationalism itself. There were turning points, such as the Soweto uprising of 1976, but few believed that the transition from white domination to inclusive democracy would occur as soon - and as relatively peacefully - as it did.

In effect, however, a multitude of different factors led the ANC and the National Party to see that neither side could win the conflict on its own terms. Utterly dissimilar in background, culture, beliefs and political style, Nelson Mandela and FW de Klerk were an unlikely pair of liberators. But both soon recognised that they were dependent on each other to steer the transformation process through to its conclusion.

What listeners say about The Rise and Fall of Apartheid