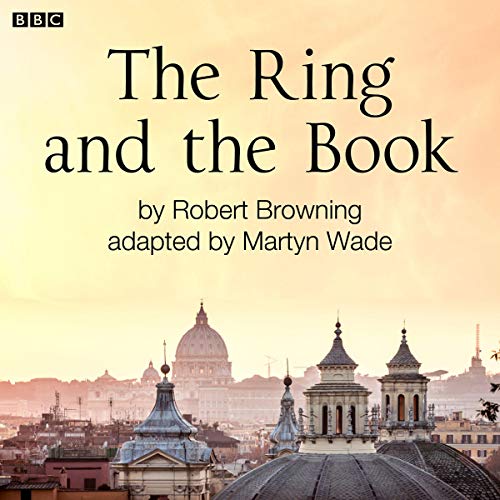 The Ring and the Book (Classic Serial)

Robert Browning's poetic masterpiece of sex, lies and murder, adapted for radio by Martyn Wade. The book - a verse novel - tells the story of a murder trial in Rome in 1698. Count Guido Franceschini is found guilty of the murders of his young wife and her parents.

What listeners say about The Ring and the Book (Classic Serial)

Extraordinary wonderful "The Ring & the Book"

Most memorable part is when the nasty brutal idiotic moronic husband gets his comeuppance, well earned & You will cheer .

Hope there are more like this Classic Serial. I am off to look 😊

The story that captured Browning's imagination

In 1860, while looking through a secondhand market, Browning found a yellow book which recounted the true life story of a murder in Rome. For many years he considered writing about it, and eventually, he did.

Martyn Wade's adaptation is impressive. Browning wrote "The Ring and the Book" as a verse novel divided into twelve books, nine of which are monologues. Interspersed with early music and well-acted by a small cast, it is a brief but intensive encapsulation of the original. Anton Lesser always intrigues me, and the supporting cast was well-chosen, too.

The little yellow book tells about Count Guido Franceschini, who murdered his wife Pompilia, and her parents, Pietro and Violante Comparini.

Violante schemes to marry Pompilia, an innocent "lily with leaf intact," to the aging count. Parents and child-bride go to live with the count in Arezzo, but soon the count throws them out. Returning to Rome, they decide they're not going to give him the rest of Pompilia's dowry. They send a letter to the count informing him Pompilia is a bastard, the result of a late-in-life dalliance of Violante. The parents keep the money, ask for the earlier installment of the dowry to be repaid, and leave their daughter in the impoverished Tuscan home of a madly jealous, sadistic husband.

Meanwhile, the count is making Pompila's life a living hell. If she so much as breathes near another man, he accuses her of being a whore, and continuously torments her with baseless accusations. He forces himself on her, and in all ways treats her shamefully. He becomes obsessed with the idea that his wife is having an affair with a priest, Father Guiseppe Caponsacchi.

When Pompilia gives birth, the count, of course, suspects the child is not his own.

"The Ring and the Book" is melodramatic, violent, and tragic. But it is also an evocative visit to a long-lost Italy, an antique legal thriller, and a strange sort of romance well worth a listen.