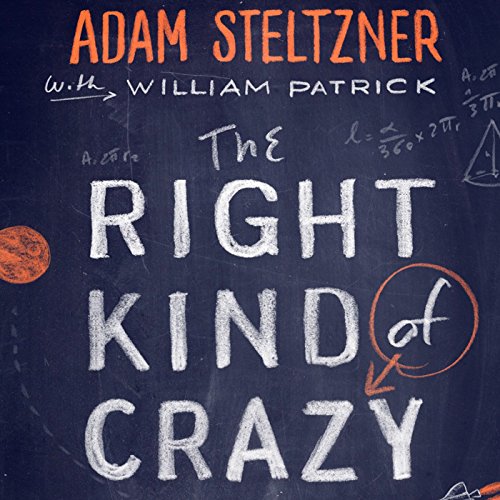 The Right Kind of Crazy

The Right Kind of Crazy

From Adam Steltzner, who led the Entry, Descent, and Landing team in landing the Curiosity rover on the surface of Mars, comes a profound book about breakthrough innovation in the face of the impossible.

The Jet Propulsion Laboratory (JPL) is home to some of history’s most jaw-dropping feats of engineering.

When NASA needed to land Curiosity - a 2,000-pound, $2.5 billion rover - on the surface of Mars, 140 million miles away, they turned to JPL. Steltzner’s team couldn’t test their kooky solution, the Sky Crane. They were on an unmissable deadline, and the world would be watching when they succeeded - or failed. At the helm of this effort was an unlikely rocket scientist and accidental leader, Adam Steltzner. After barely graduating from high school, he followed his curiosity to the local community college to find out why the stars moved.

Soon he discovered an astonishing gift for math and physics. After getting his PhD he ensconced himself within JPL, NASA’s decidedly unbureaucratic cousin, where success in a mission is the only metric that matters.

The Right Kind of Crazy is a first-person account of innovation that is relevant to any­one working in science, art, or technology.

The Right Kind of Crazy is a book for anyone who wants to channel their craziness into creativity, balance discord and harmony, and find a signal in a flood of noise.

What listeners say about The Right Kind of Crazy

A true feast for curious minds!

Recently I watched a documentary about NASA's Mars missions and some of the work book described, problems and solutions were super briefly touched on there, but this book gave unique insight and amazing depth of detail. Kind of made me feel like I was there, even though I knew it was a TV documentary I saw recently. fun, great fun! Leaving geeky bits out, it has some very good leadership lessons. I just hope I remember them and will be smart enough to put them to use at the right time.

Wasn't what I was hoping.

I'd give this book a solid "C-" rating overall. I picked it up hoping it'd be an exciting story primarily about the team, the decisions, and the process of how a complex NASA mission comes together.

The book had some of that, but not enough. There's a fair amount of biography that felt a bit unnecessary, arrogant, or seemed forced (like what motivational quites he claims to have written on his college physics exam equation sheets). Parts seem contradictory (bashing what he calls transition points from NASA Langley, but never seems to acknowledge his own designs had 100 transition points, etc.). Overall, the book came across too similar to a politician, who wrote a book to "write down his version of history."

Perhaps I'm biased. As a scientist who's got no current connection to NASA, I was hoping to pick up a book that'll turn my eyes to the heavens in wonder. I almost stopped listening when it became clear that feeling would never come.

Very rarely does story telling and leadership lessons come through in one book. Adam put it all together and ignited a passion for the engineer in me to challenge my curiosity.

For space AND business geeks

I'm not often planning a 10-year mission to land a Mini Cooper-sized UFO on a hostile planet like Mars but the lessons Steltzner suffers through while doing just this can be applied to every day life. I'm a space and business geek...this satisfies both sides of that coin.

Good mix of lessons in problem-solving, teamwork, and leadership. The subject-matter of Mars landings keeps the story engaging.

A Challenge to Curiosity and Creativity

Steltzner spins a good story. He can be a little full of himself, but his audacious, inquiring spirit is contagious. Good insights into problem solving and team building.

All that craziness expected

The book taught me about a lot of points of life as professional. Specially related to the common goal. Which drives to success of the project and the leading aspect of human nature for connections in the ongoing activities.
Highly recommended for those who are willing to be an executive some day.

Excellent recount of an amazing story

What was one of the most memorable moments of The Right Kind of Crazy?

When Nasa finally approved rover on a rope

If you could sum up The Right Kind of Crazy in three words, what would they be?

From first word to last, Right Kind of Crazy paints a picture of human potential and our drive to reach it, only to find there is even more potential on the other side then we ever realized. It compels the listener onward, to understand what happens when we're scared of discovering our potential and what happens when we go for it, eyes wide open because our curiosity says we have to. And throughout, this narrative unfolds to reinforce how much more potential there is when we come together in order to do great things. The fact that all of this unfolds in the context of interplanetary exploration is just icing on the cake...

Have you listened to any of Christopher Grove’s other performances before? How does this one compare?

Have not, but after this one, looking forward to hearing more of his work.

Great book about curiosity to learn more, being a team and cool entry-descent-landing tales from Mars.