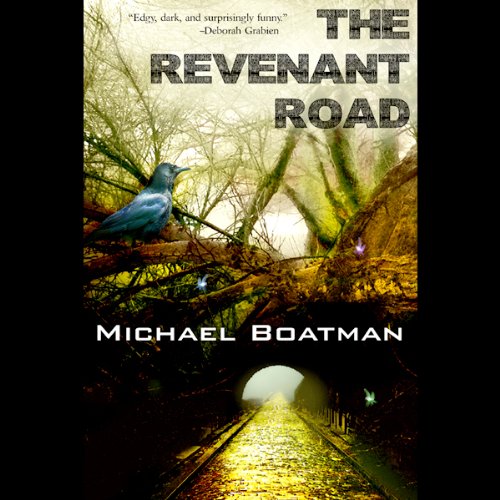 Obadiah Grudge is tall, dark, and gaunt, though he prefers the word rich. He dresses well and has a taste for the finer things, so its a good thing that the mysteries he writes consistently hit the top of the best-seller lists. The critics hate him; his public loves him. He has everything he wants.

Then one day, he gets a call. His estranged father is dead, and its time for the family funeral. While his mother, his father's partner, and finally his father's ghost work to convince Obadiah that he's special, Obadiah is discovering that for himself. He barely escapes death by deranged killers, not all of whom are entirely human.

Obadiah has inherited his father's monster-killing business, his lunatic of a partner, and his pet Raven. It's too bad he didnt inherit his father's skill. It seems Dad's death has put Obadiah's feet on The Revenant Road, and there's no escape from that.

This edition includes the bonus story "Neville and the Midnight Miracle Massacre". Neville, Grudges partner in the monster-killing business, came by his mistrust of religion and his hatred of monsters early, but he's never liked to talk about it. Then Neville disappears, and Obadiah finds he has to get nosy if he's ever going to be the monster-killing partner his father was.

I love horrors and thrillers so thought I'd give this a go based on a couple of brief reviews and a synopsis I found on Amazon. The 'ghost busters for adults' premise sounded interesting but I was really disappointed. The characters just aren't developed or likeable enough and more importantly the story is neither scary nor tense. There is a lot of sardonic humour and this is done quite successfully but this goes hand in hand with the authors flippant attitude toward the narrative progression contributing to the absence of any real atmosphere. It's short also, the last hour and something is some sort of side story (filler). Even if you enjoy this book be prepared for the abrupt finish before it really gets started.
Also the author seems to be fond of similes; they're not bad but frequent enough to remind you that you're listening to a book rather than being lost in a story.

I tend to hate negative reviews, even more so when its the only review but these audio books ain't cheap and even if you're just using credits you could probably do better. I have previously listened to The Snowman by Jo Nesbot which I found to be gripping and well written and Jack Kilborn's Endurance which I found to be scary, fun, a little clichéd but well delivered (by author and narrator).

I thoroughly enjoyed this story, it was different to most other Ghost Buster type stories and was refreshingly original in its content and structure. I look forward to the next installment and hope it has more real life character comparisons like 'The Queen of Daytime TV'. Well done!

I'll be the first to say it isn't literature, but it's pretty damn entertaining! Lots of stuff going on and a reluctant hero. Three books worth of story lines crammed into one book.

This story would have been better if the main character hadn't been portrayed as such an arrogant wimp. I know, I've never come across such a character before but this one was extremely annoying.