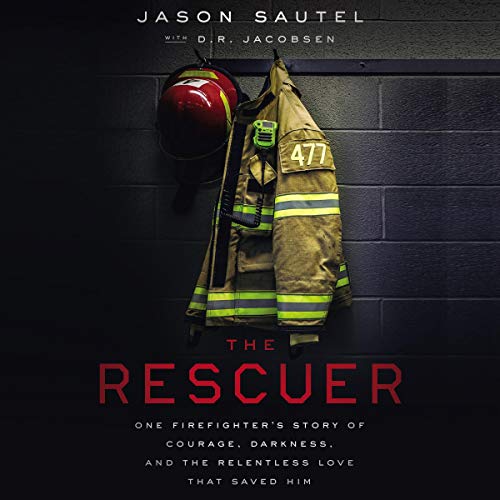 He helped save people every day - but he had no idea how to save himself.

Jason Sautel had it all. Confident in his abilities and trusted by his fellow firefighters, he was making a name for himself on the streets of Oakland, California. His adrenaline-fueled job even helped him forget the pain of his childhood - until the day he looked into the eyes of a jumper on the Bay Bridge and came face-to-face with a darkness he knew would take him down as well.

In the following months, a series of traumatic emergency calls - some successful, others impossible-to-forget failures - drove Jason deeper into depression. Even as he continued his lifesaving work, he realized he could never rescue everyone, and he had no idea how to save himself.

In the end, Jason was forced to confront the truth: Only the relentless power of love could pull him back from his own deadly fall. Action-packed, spiritually honest, and surprisingly romantic, The Rescuer transports listeners inside the pulse-pounding world of firefighting and into the heart of a man who needed to be broken before he could finally be made whole.

What listeners say about The Rescuer

The scope of which Jason is able to describe darkness AND hope is exceptional. I relate as a hospital Social Worker for 18 years.
Thanks for putting it into real and interesting words!!!

Great book easy listen and I hope there's a second one coming out love it !!

Narration is great, makes the story that much more human and relatable. I laughed and teared up reading this but really appreciated how this book made me feel and appreciate the good things.

Good book until the preaching started

I wish books would give us a hint if they contain a lot of religious content. I was expecting stories of the life of a firefighter, not a story of being reborn.

I loved listening to Jason Sautel's true story as a firefighter needing rescuing himself. Fighting not just physical fires, but personal fires. Discovering the fire in his soul, rather than putting out his soul's fire, Sautel pursued the light that was igniting it inside of him.

He shares his challenges as a firefighter in Oakland, CA, while also sharing his personal challenges. Trying to make sense of so many tragic scenes and heart-wrenching outcomes, Sautel manages to also light the scenes on fire for his readers.

My go-to books are Christian non-fiction with redemption and transformation outcomes. Jason Sautel's book brings hope that no matter how low we may get, we all need someone to save us, even if we are a firefighter. Sautel shares that Jesus is The Rescuer and He rescues us from the darkest despair and rebuilds what has been destroyed.

I have listened to this book twice!
Very well read and kept my attention. I'm sharing it with a friend

The most relatable book I have ever read (listen to)

The book was difficult to read/listen to at times because of the detail and the shared experiences we all have as firefighters, medics, police officers, ER doctors, and nurses but it was also an eye-opener for me as I related to not only you the author/firefighter but also some of the people you dealt with in your career. I had hoped the book was more faith based- a firefighter struggling with his faith, fighting the blackness and finally finding the Lord and peace and how he did that. I guess the way to the Lord is different for different people and your way worked for you! I’ll keep looking for mine and fighting the blackness! Thank you very much for sharing your story!

This is a very is a brave insight to one’s struggles with personal demons . . . Very good.

Such a great story! Great performance as well.

I loved this story. Mostly because I love real stories of people’s lives. Jason did a great job of putting his life down on paper. The narrator did a wonderful job.

A book you must listen too

Absolutely loved it. A must for anyone so is/has been fighting demons. Could relate to this guy so much.. Perfect choice for the narrator.

I didnt want to stop listening to this book and was quite gutted when it finished.