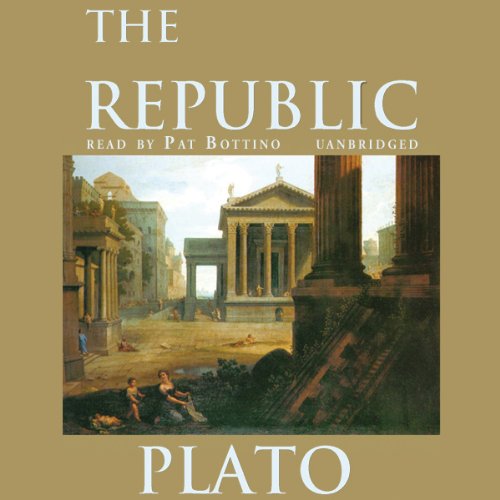 In this monumental work of moral and political philosophy, Plato sought to answer some of the world's most formidable questions: What does it mean to be good? What enables us to distinguish between right and wrong? How should human virtues be translated into a just society? Perhaps the greatest single treatise written on political philosophy, The Republic has strongly influenced Western thought concerning questions of justice, rule, obedience, and the good life.

This work is also undoubtedly the best introduction to Plato's philosophy in general. Not only does it contain his ideas on the state and man, but also his famous theory of forms, his theory of knowledge, and his views on the role of music and poetry in society.

What listeners say about The Republic

I combined this audiobook with the kindle version and read it alongside listening to the Great Courses lecture series (can’t remember the lecturer’s name) which is also available on Audible.
I really feel that I have solid understanding of Plato now, having first encountered his work through Karl Popper’s critique of him.
The Republic really is essential reading for anyone interested in political theory/philosophy. Throughout the book, it gradually dawned on me just how central Plato’s ideas are to the entire history of western thought.
Although the narrator’s voice was fine, the recording could have been better. With the editing techniques available now, there is no excuse for excessive ambient oral noise. It bothered me at times, but I imagine most people will be able to ignore it.

I am quite deep into this version, having read large parts of the Republic in other translations. Translations do matter for Plato, as the translators introduce their own biases into the result.

This is the 1894 translation by Bejamin Jowett, Oxford theologian and classical scholar, and seems particularly sympathetic to harmonizing Plato and Christianity. This of course is an old tradition, but its use of Christian concepts seems a bit heavyhanded nowadays. Nevertheless, the translation itself is considered by some an English language classic.

But that is a minor point. The book is a major foundation stone of Western civilization.

plato is king as usual

better version of this discussion on scribd. either way, find a version that works for you and soak in some plato. you cannot go wrong in doing so friend

This is the Key most work by Plato & must read for all who lead or aspire to lead people in all facet of life.

I loved the book in college and the audio book is even better. Great narration too! Hard to believe this book, which is still so relevant today, was written that long ago.

Worth it for understanding early philosophy

It's wonderful to hear the Socratic method of questioning in full force, but I would have liked Glaucon to be more challenging to Socrates in his line of thought. During the entire affair he's only really challenged once, and only given questions about his reasoning a handful of times. For the most part, Glaucon is far too agreeable with everything Socrates throws at him. There were several instances of Socrates getting away with false dilemmas, and showing one instance while assuming application to every instance.

I liked Pat's tone, but I would have liked more differentiation between the two speakers voices. It was at times difficult to discern whether it was Socrates or Glaucon speaking.

I'm glad I listened to this.

It was difficult for me to understand, what with the extremely tedious rhetoric and all. The narrator does a good job of using the right amount of inflection without trying to be dramatic.

Every American should read this!

Check out Dr.
Cuddeback on Institute of Catholic Culture to give a “guided” tour of The Republic. Excellent book…excellent teaching!

Having been years since I've read this, I have forgotten its weight in gold. Parts tgat struck me most was how society should recieve music was enlightening, on so many levels. To birth and raising children, Socrates eerily is hint at the false science of eugenics, or genetics. To how accurate archtype personalites are in different governing systems, espically today reguardless of our tech. advances some 2395 years later, it couldnt be anymore accurate to politics and policy across the world in the last 300 years. This should be taught or at least read by everyone at a young age!

Platon in English - well read version of a classic

it is a very good rendition of one of the best books ever written. Recommended for anyone who knows English and has an open mind. the book is not about a system of government, as many think, but it is an allegory for the structure and nature of the human psyche.