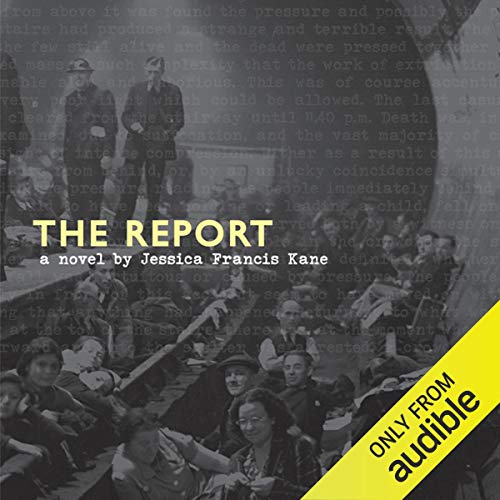 A stunning first novel that is an evocative reimagining of a World War II civilian disaster. On a March night in 1943, on the steps of a London Tube station, 173 people die in a crowd seeking shelter from what seemed to be another air raid. When the devastated neighbourhood demands an inquiry, the job falls to magistrate Laurence Dunne.

In this beautifully crafted novel, Jessica Francis Kane paints a vivid portrait of London at war. As Dunne investigates, he finds the truth to be precarious, even damaging. When he is forced to reflect on his report several decades later, he must consider whether the course he chose was the right one. The Report is a provocative commentary on the way all tragedies are remembered and endured.

What listeners say about The Report

a little-known event viewed from an unusual slant

I bought this audio-book having heard the written version reviewed on Radio 4's "A Good Read" and I was not disappointed. Like many people I suspect, I had never heard of the Bethnal Green Disaster, so the first point of interest was simply to learn about what happened. However, the weaving of the facts into a novel, (in which the perspectives of some of the characters involved and two different time-frames was achieved with more skill than is often the case) brought the whole incident to life. Various themes for thought are clearly suggested, but not to the exclusion of the enjoyment of the novel as such.

Graeme Malcolm reads with admirable clarity and precision - my only quibble with the book is that I would have preferred greater variety of intonation.

I recommend this as a very good listen.