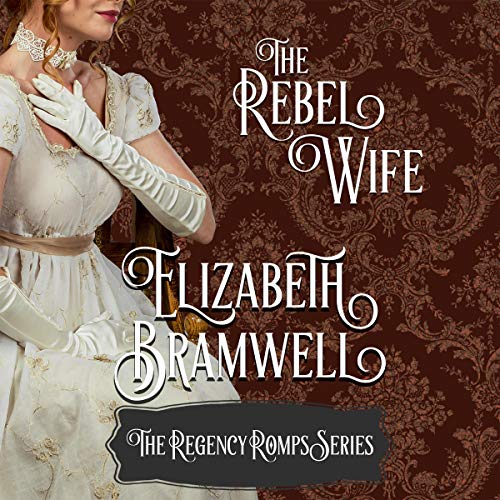 By: Elizabeth Bramwell
Narrated by: Julia Eve
Try for £0.00

Married out of the schoolroom to her childhood hero, Kate had believed that life would finally hand her a happy ending - right up until her husband abandoned her for foreign shores less than an hour after their wedding. Since then she has forged a place for herself in society, and endured the cruel gossip about the state of her marriage, for even though she has been forced to face the Ton alone, she is still a Duchess.

Alexander Weatherly, the Duke of Lexborough, thought he could go through with the marriage, only to find that his child bride was too young for him to place the burdens of the Dukedom upon her. He left her in the hands of his mother as he set sail of Europe, always intending to come home one day...only to find 10 years have passed him by.

While Kate believes that she has done a good job managing the family affairs during her husband's absence, Alex is horrified to learn that it was not his man of business but his young wife who has been in control all this time. As he tries to wrest back control of his obligations from staff more loyal to his wife than to him, it is inevitable that Alex and Kate will clash on just about every issue under the sun. If they can only get past their feud long enough to see reason, they just might discover that love can be a part of their marriage, after all.

What listeners say about The Rebel Wife

A Fun Romp Through the Regency

What a great little book! This was a nice easy listen to relax with. The narrators voice is well suited to this type of book. I loved the story and the characters. It wasn’t a nail biting graphic story but a lovely story about love and family and life lessons. Thoroughly enjoyed it.

I quite enjoyed the book even though I don't like Julia Eve's presentation of the characters.

This was quite a charming historical romance. I loved how Katie didn't need a resident husband for her to become such an admired member of the ton. It was really sweet the way his family and his servants adored Katie and took her side over Alex at every turn. Alex's attitude made him quite unlikeable at times especially when he treated Katie like a dim little woman. However, as he began to realise his mistakes and altered his way of thinking I liked him a lot more.
I voluntarily reviewed a gifted review copy.

This was very different from what I normally listen to but I really enjoyed it.
It’s a sweet second chance for an already married couple.
Alex did frustrate me at times but over all I enjoyed the change in him as he gets to know his wife.
I’m off to search for the other books in the series!
#audiobookobsession

Brilliant, loved this book, found it funny in places and quite daring, on to the next book

A well paced and fun tale

This is my first book in the Regency Romps Series and I was a little worried I had purchased an erotica romance. I was very grateful this was a clean read that masterfully portrayed the ups and downs of a romance journey that started off very negatively followed by a rocky and empty 10 years. The redemption journey that follows is satisfying and fun.

I have to say Julia Eve's narration and the novel's overall style for me took a little time to warm up to but persevering was rewarded and I have now purchased 4 more books in the series. The side characters were presented in an engaging and detailed fashion in 'The Rebel Wife' and I am looking forward to reading all their individual stories. If this book is any indication it will be a rewarding and unique but light ride. Exactly the escape I was looking for this week.

Charming and appealing to the modern woman

This was a charming regency romance that is appealing to the modern woman who is drawn to the aesthetic of the regency era but has a more modern take on gender roles, marriage, and society. I enjoyed this fun little regency romp and would enjoy listening to more in the series.

I always like an intelligent female protagonist and this book does not disappoint. I enjoyed the lighthearted plot and especially appreciate that it is clean.

5 star plus loved it

I found this to be humorous, fun, cute, I laughed a few times, shook my head and watched Kate play her games with Alex, lord that man just could not keep putting his food in his mouth. Alex’s brother is a mess and I grew to love him the most, I think I laughed the hardest at him. This was true a delightful listen that I will be listening to again and again.


The narrator did an outstanding job from her true emotions to her character voices. I always knew who was talking and how they were feeling, it really showed in her voice. Her different character voices were wonderful, she really bought the story to life. There were no volume changes, no background noise just a wonderfully delightful and very enjoyable audio that I got lost in. Her character voice were powerful, her tones right on the money. Each character voice was a delight, her male voices were just as good as her female ones. It was a true pleasure to listen to this narrator. She has a voice you could listen to all day.


I thought the author did a great job pulling the listener in, giving a delightful story that took you way not wanting it to end. Her characters show strength, power, passion and have become to feel like part of my family. The women stand up for their selves not backing down but also showing true passion. Her men are hard but kind, true gentleman. The romance is sweet, daring, filled with fun, thrilling, a little danger and so much passion. I loved the plot and the characters, I doubt you can listen to this and not laugh. I adore the humor and how Kate gets her own on a few pranks to Alex, it was a delight to watch him put it all together and realize what a behind he had been. The author gives you a delightful story with the narrator giving it a home run with her talent. I just love this, it is a 5 plus listen,

I truly enjoyed this from start to finish. I can’t wait to start the other ones in this series. I totally enjoyed this authors writing very much, it is one that I will listen to again.

I really enjoyed this story. This is book #4 in the Regency Romp series. This particular one was by far my favorite. It was full of the historical details from the time period and was very witty. A Duke who realizes the error of his ways & a Duchess who was the hero from the start. Julie Eve, as usual, does a fantastic job narrating.

Another interesting and clean read by Elizabeth Bramwell. I enjoyed listening to this one and am looking forward to the next one in the series. I was glad I got a few glimpses of characters from previous books. The narrator did a great job on this one.

Elizabeth Bramwell does it again

Book #4 in the Regency Romp series does not disappoint! Julia Eve continues to do a consistent and entertaining job of narration. Elizabeth Bramwell does a great job interweaving characters from previous books while delving deeper into characters who have played side roles before. Great series!

This is a romp. By my definition a romp should not be taken too seriously. It is supposed to be fun. And perhaps a little silly like an old screwball comedy film. Is the Duke an idiot? Yes. Is his condescending attitude toward his wife annoying? Yes. Did I want to slap him up side the head for being so stupid? Yes, at least as much as his wife did. But this is a romp. We are supposed to dislike his overbearing obnoxious behavior. He is written to be disliked. So, don't take it too seriously. Just have fun with it. I was rather hoping for a bigger blow up when he finally discovers his mistaken assumptions but I was glad that it was his wife that finally showed him. And while I can see why things had to play out as they did, I'd rather hoped that the Duchess would be the one to resolve her brother-in-law's problems with a great set-down since that chit was well deserving of it. But perhaps it is best to allow people to resolve their own problems.

I'm thinking this story could have been the basis for an old screwball movie. I'm thinking through the book as a movie and it totally works. Who would you cast in the main roles?

I like this narrator over all though the Duchess was kind of nasally. It worked in the other books but it was harder to have her not sound as "pretty" when she is the lead character. Still I have enjoyed the narrator through the entire series.

Sex: no
Language: yes, mostly mild. some Deity
Violence: no

Being stuck at home really stinks, but listening to this series has made it so much more enjoyable! I can listen while I clean out closets or sit in the sunshine. I love it!

I enjoyed listening to The Rebel Wife. It has a fun storyline with some unexpected events. The descriptions are vivid and the characters will have you pulling for their HEA. The performer did a wonderful narration.