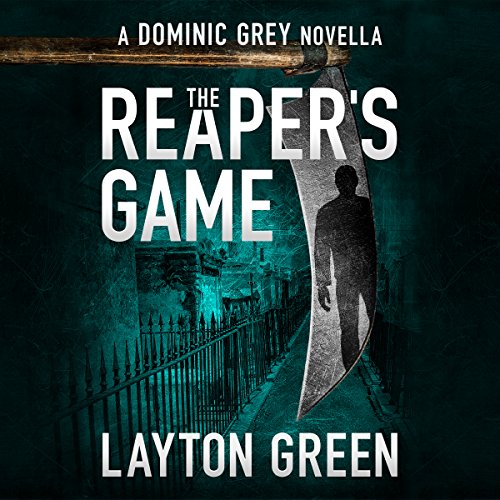 In this pulse-pounding novella, Amazon best-selling author Layton Green crafts another chilling, atmospheric entry in what critics have called "the most original series in years."

Is it murder from beyond the grave...or the final ruse of a twisted serial killer?

Less than a week after the lethal injection, Sebastian Gichaud, a wealthy playboy grieving over the death of his mother, throws on a black cloak and hacks the prosecutor to death with a giant scythe. Not only did Sebastian appear to be fulfilling the serial killer's last wish - he claimed that he was the Halloween Killer.

Now, as the anniversary of the grisly murder approaches, Sebastian is facing trial. No one will touch the case. In a desperate attempt to save his son, Sebastian's father hires Viktor Radek, professor of religious phenomenology, to investigate.

If Sebastian is guilty, Viktor wonders, then why are he and his associate Dominic Grey being warned off the case? And why did the Halloween Killer visit a series of reincarnation experts before his death?

None of Professor Radek's doubts might matter, because he and Grey face the impossible task of convincing an Orleans Parish jury that Sebastian Gichaud is either a prisoner in his own mind - or possessed by the spirit of the Halloween Killer.

(Note to fans of the Dominic Grey series: The Reaper's Game is a standalone novella that takes place earlier in time than The Shadow Cartel.)

What listeners say about The Reaper's Game

When starting a series during a mid-point there are a couple of questions that can naturally arise.

1. Was I able to understand who the main players were quickly or did I feel lost?
In this case, I got interested in the main characters of Grey and Victor quickly and became intrigued by them. I never felt lost while listening but did feel like I might appreciate the story more if I went back.

2. After reading this do I want to go back and read the books that came before?
Yes, I do want to go back and listen to the other books in the series which speaks to the ability of this one to hold my interest. It was a fairly quick listen and I was never really sure of where the plot resolution would come from.

Whenever I have had a chance to hear Peter Berkrot's narration, I have always enjoyed it and this was no exception. Character dialog was easy to follow because I could easily identify the unique voice he gave to each speaking part. When it comes to tone, I think he does menacing and sinister really well which fits well with the subject matter.
Lastly, I feel it only fair to note that I was given a free copy in exchange for an honest review.

Sebastian Gichaud is in jail for killing the New Orleans DA with a scythee and dressed as Death. The murder reminded the public of the ones perpetrated by the Halloween Killer, sentenced to death some time before. The most notable thing is that delicate and sensible Sebastian seemed a completely different person from what he used to be, and he himself proclaimed to be the original Halloween Killer. In a city where voodoo and other powerful powers are among the most normal things, everything is possible.

This is the fifth book in the Dominic Grey series, but as it is, in fact, a prequel, it can be read as a stand alone novel. I have not read the other books in the series, but this did not prevent me from enjoying this story. I not usually a fan of paranormal, but this book is so well written with such powerful characters that it kept my attention from beginning to end.

Dominic Gray and Viktor Radek will be known to fans of the series, but they were knew to me. Nevertheless I got a clear idea about who they were and how they worked their cases. The book is written in a very cinematographic way, which made me think that I was watching a movie. A movie based on this book could be a total success. It somehow made me thing of Edward Norton’s Primal Fear.

The audiobook is less than four hours and a half, which makes it a quick listen. It is really worth it, since there is not a minute wasted on this. Sometimes I feel that some books are longer than they should, and that some parts should have been cut out in favor of the story. Not here, it is an action packed book with nothing to spare. It is just as it should be.

What made this book even greater was the superb narration by Peter Berkrot. He juggled voices and accents like if it was the easiest thing in the world, delivered great characters’ interpretations and gave me the feeling that I was watching a movie with a full cast of actors.

Both writer and narrator were new to me, but I will definitely try this series from the beginning, since these books are very well written and the narration is one of the best I had the pleasure to listen to.

This based become one of my favorite series. the twist and turns are great. well written, and as always well done.

This story grabbed me right from the start. I love books set in New Orleans, with hints of voodoo, the supernatural, and magic – and this one did not disappoint. The story begins with a wealthy father who hires a professor of religious phenomenology, Viktor Radek, and his associate, Dominick Grey, to investigate the murder of the local district attorney. His son, Sebastian, is arrested for killing her, and even though there were witnesses and his fingerprints on the weapon, there is much more to the story.

The D.A. is murdered less than a week after a serial killer, nicknamed the Halloween Killer, was put to death by lethal injection, for the horrific murders of six people. His last words were a vow of revenge against the district attorney. In the same vein as the movie Fallen, Layton takes us on a journey of deceit, unexpected motives, and soul swapping.

After the murder, Sebastian claims to BE the Halloween Killer. Sebastian takes on more than just the deceased killer’s voice and personality. Is he faking it to avoid the death penalty? The closer Viktor and Dominic get to the answers, the more dangerous it becomes for them. Someone has something to hide and is willing to kill anyone who threatens those secrets.

Is Sebastian a killer or has the Halloween Killer indeed swapped souls with him. This is a story that could come across as contrived – reincarnation, possession, soul-migration, but Layton does an incredible job of showing believable proof that soul swapping could be the reason that Sebastian, inhabited by the soul of the Halloween Killer, killed the D.A., while also using other plausible explanations that a jury will believe. Layton has built several layers of intrigue that he peels off a little at a time.

The audio production was excellent as was the narrator. Peter Burkrot’s narration is phenomenal. Each character is easily discernable, and his accents are fantastic. His voice kept me engaged. He was the perfect choice to narrate this audiobook.

Even though this is a novella, it reads like a novel. I had the same feeling of satisfaction that I find with longer stories. Now, I can’t wait to read more of Green’s work.