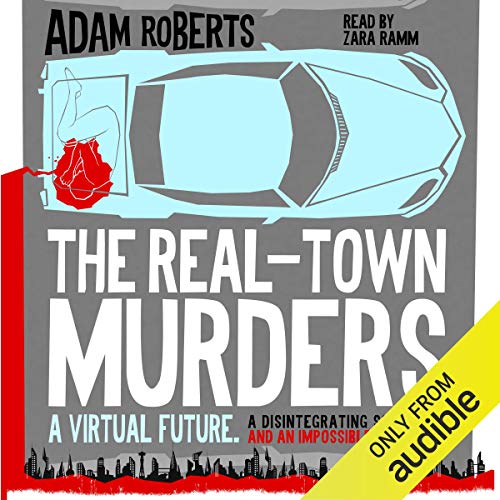 Alma is a private detective in a near-future England, a country desperately trying to tempt people away from the delights of Shine, the immersive successor to the Internet. But most people are happy to spend their lives plugged in, and the country is decaying.

Alma's partner is ill and has to be treated without fail every four hours, a task that only Alma can do. If she misses the five-minute window, her lover will die. She is one of the few not to access Shine. So when Alma is called to an automated car factory to be shown an impossible death and finds herself caught up in a political coup, she knows that getting too deep may leave her unable to get home.

What follows is a fast-paced Hitchcockian thriller as Alma evades arrest, digs into the conspiracy and tries to work out how on earth a dead body appeared in the boot of a freshly made car in a fully automated factory.

What listeners say about The Real-Town Murders

Too much info dumping at times and as I approached the end of the book I was concerned that the author wouldn’t reveal how the body had actually got into the car.

Still, Alma is a compelling character and in quiet way very bad ass (taking out the fake nurse with a gun being pointed at her chest). I hope the author returns to Alma’s world in the future.

The beautiful bastard child of Asimov's Naked Sun and Cline's Ready Player One.

It is a really good book

I love i, the person reading it was great and the story deadly good. I could not recommend it more

entirely in the realm of possibility! Which on some level is more than a little scary.