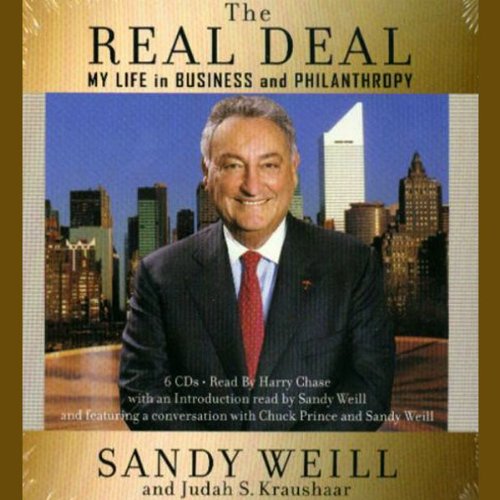 The Sandy Weill story is truly one for the ages. Starting with $30,000 in borrowed cash in 1960, and relying on uncanny entrepreneurial instincts in the corporate world, he made himself a billionaire and became one of the most powerful bankers in the world. After rising to become the president of American Express, Weill saw his empire crash and burn. Undaunted, he started over with a second-tier consumer loan company called Commercial Credit, which eventually led to his position as CEO and then chairman of Citigroup. While at Citigroup, Weill delivered an astounding 2,600% return to investors, better than legendary CEO Jack Welch or investor Warren Buffett during that same period. But success is never an easy path, and Weill shares all the high and low points along the way.
©2006 Sandford I. Weill. All Rights Reserved (P)2006 Hachette Audio. All Rights Reserved

This story can be taken on many levels. It is a classic USA personal success story. It is a well-told blow-by-blow of an important stretch of business and financial history. But the passage of time has added dimensions unseen and unintended by the author (for whom, make no mistake, I have great personal admiration).
Sanford Weill had big vision and ideas. He was an amazing empire-builder in business. His management tenets are excellent. His "can do" spirit is contagious. His ethics are (in the telling here) to be admired.
But time and history wash over the doings of any person, sometimes with strange ironies and mockeries. USA is a place where business builders (and others, military leaders and so on) scale up ideas to a reach and impact undreamed of. And these things can go awry as time unfolds. I don't necessarily blame (in all cases; I do in some) those who dare and try on this scale. Things are tried, some work, some crash, and ultimately we (or a critical mass of us) have come out pretty darned well.
And that's how I view Weill's corporate masterpiece, the assemblage of Citigroup. This (and the legislation it helped to bring in) later turned out to be the poster child for the modern lumbering "too big to fail" banks that crashed so awfully in 2008, and which We the Peasants got to bail out. We didn't get the estate in Greenwich, we got the degraded part of the economy. It's an old story, and one unsolved to this day. Meanwhile the folks in DC flail at each other and bicker. But hey, I got my affordable home loan from this financial system, and on balance, I am not complaining. I am living my American dream, partly thanks to folks like this.
It is Mr. Weill's misfortune to have published this book (much like Alan Greenspan's 'Turbulence' memoir) basking in the golden light of modern success and adulation right on the eve of the 2008 mess, which completely scrambled those narratives, at least in the popular mind. It is reminiscent of Fisher's mid-1929 proclamation that stocks seemed on a permanently high plateau. Oops. Meanwhile, I come away from this book better informed on business history, and inspired by Mr. Weill's account of it. He has an elegant manner of self-expression, yet compact and descriptive. Some of the folks described would doubtless have a different account -- for example, next up for me is the book here on Weill's onetime protege Jamie Dimon. Sanford Weill doesn't sound terribly high-handed considering who he is and what he did. Oh, and the narration seems (in light of the above later history) kind of ironic itself, inasmuch as it has the punchy sound of an old-time announcer. It goes fine.
As with many books, particularly autobiographies, I know I will get a cherry-picked kind of story. I need many voices to give me perspective. But as such things go, this is one of the better ones.