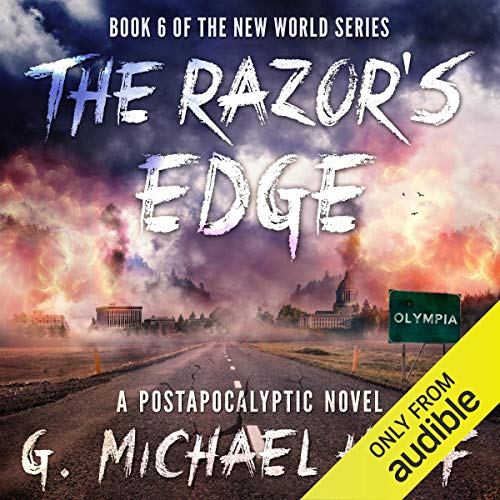 By: G. Michael Hopf
Narrated by: Joseph Morton
Try for £0.00

Gordon Van Zandt is a man accustomed to adversity and hardship, but now he is left with dwindling options. With his fledgling republic teetering on the verge of collapse, he must find a way to seize an unlikely victory from what appears to be certain defeat.

President Cruz is no stranger to the position he holds, having served in Conner's absence before. However, this time the job is proving to be difficult and downright impossible. The remnants of the United States are being held together by a patchwork of governors and bureaucrats, some using his weakness as a means to enrich themselves. With the war against Cascadia at a standstill, he must make a decision to either negotiate peace or continue the war that has done nothing but damage each side and left his military scattered and weakened.

Both men are in precarious positions and riding the razor's edge towards an uncertain future.

What listeners say about The Razor's Edge

Wow, Hopf. Next time give me some warning that you'll be getting in touch with your feminine side so I can break out the bonbons, bubble bath, and Kenny G. This was extremely disappointing. And will somebody PLEASE light a fire under that narrator's butt? Hopf even states that a character is SCREAMING, but Ben Stein still reads it as, "Bueller...Bueller...anyone?"

Some much action; one great story

I didn’t want to put this book down! There is so much going on, but the plot is laid out so well, that it all flows seamlessly. Gordon is fighting to keep Cascadia a free country; Cruz is trying to keep the US together and surviving, while leaders in Canada have plans of their own. This post-apocalyptic series just pulls you right in, and you won’t want it to end.

Joseph Morton is a great narrator! I enjoy listening to him read; he adds drama and character to the story through his performance.

Hopf delivers again. the story took some unexpected turns and pulls you in for more.

Great series but the books by this author are getting shorter and shorter. Same price

the narrator does such a great job that you can't help but get hooked. The storyline was interesting and a couple of scenes were pretty gruesome, but realistically portrayed in the setting of the story. Can hardly wait for the next book.

The "Calm" before the storm.

have really enjoyed the series and even though the story slowed it does tie up things and prepare you for the continuing saga of the Cascadians.plus more back ground to continue to build a really good story full of characters.

Gods follow up to the series. Looking forward to the last installment. Though am sad the series will be done.