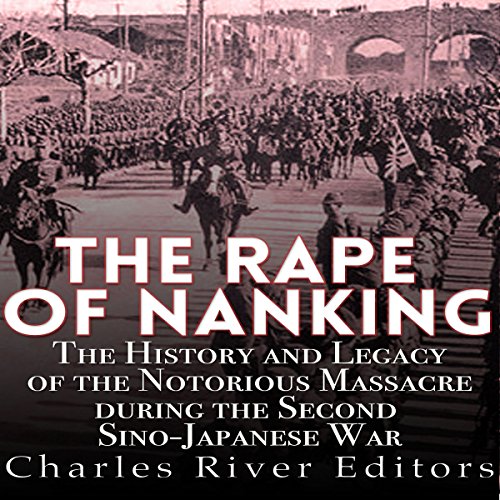 The Rape of Nanking

The History and Legacy of the Notorious Massacre During the Second Sino-Japanese War
By: Charles River Editors
Narrated by: Colin Fluxman
Length: 1 hr and 23 mins
Categories: History, 20th Century
4 out of 5 stars 4.0 (1 rating)

The Rape of Nanking

Three days of plundering traditionally befell cities taken by storm, a fate usually avoided by those surrendering before the first attacking soldier penetrated beyond the outer walls. In Europe and areas influenced by Enlightenment thinkers, this practice faded rapidly after the Napoleonic Wars. In 1937, however, as the Imperial Army of Japan invaded China, this custom returned in a horrifying new form - the Rape of Nanking or the Nanking Massacre, a bloodbath lasting more than six weeks and possibly claiming more than a quarter of a million lives.

Even Third Reich personnel in the city interceded in a sometimes futile effort to rescue victims from their tormentors. At the end of the city's long harrowing, the world knew clearly, if it did not before, that the Japanese of Tojo and Hirohito showed a very different spirit than the exquisitely genteel and chivalric men of the Russo-Japanese War of 1905. The fight against Imperial Japan represented not merely an effort to avoid being conquered, but for survival itself.

I listened to this for a historical account of Nanking but instead found an author who inserted his own opinion on various topics and acted as if they were fact with no further explanation.

Another point if contention, (there are still more) blames this massacre on bushido and even goes as far to explain western civility on chivalric code. This shows not only a deep misunderstanding of bushido but also a complete disregard for the myriad of western atrocities.

After seeing this book was recorded as a part of an educational series I was disgusted. Next time how about a little more historical fact and a little less blatant opinion mixed with cheap sensationalism?