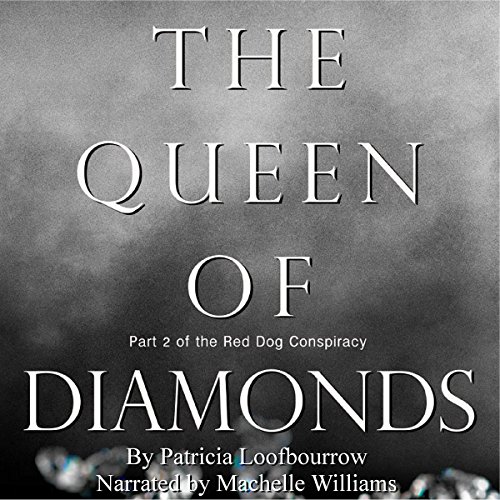 The Queen of Diamonds

By: Patricia Loofbourrow
Narrated by: Machelle Williams
Try for £0.00

While the villain Frank Pagliacci has been defeated, all is not well in Bridges. The Four Families accuse each other of spying while Red Dog attacks escalate. Aristocratic jewel merchant Dame Anastasia Louis, styling herself "The Queen of Diamonds", hires her long-time friend, private eye Jacqueline Spadros, to collect from her debtors so she can leave the city.

But Jacqui can't leave David Bryce's kidnapping and the murders of her teenage informants unpunished. Convinced that her mortal enemy, the madman "Black Jack" Diamond, was complicit in the crimes, she pursues ways to prove it. The scoundrel and his crew, however, seem to be one step ahead: the terrifying man in white is seen outside David's home, forged letters are appearing across the city, and merchants in the Spadros quadrant report threats from a man who fits his description.

Jacqui is warned of a plot against her life. Those who try to warn Jacqui are murdered, and evidence emerges that Jacqui's mother is next on the list. With time running out, Jacqui is forced to make a horrifying choice.

Someone will surely die. Will it be Jacqui, or her mother?

Note: this is chapter two of a 13-part serial novel, the Red Dog Conspiracy. While it's not mandatory to have listened to chapter one (The Jacq of Spades), it's highly recommended to do so before venturing forth.

What listeners say about The Queen of Diamonds

Obsession. Blackmail. Betrayal.
What if your best friend was helping your worst enemy?

A read that put a spell on me from the first chapter. Such an intriguing read full of blackmail, murder plots, secrets, action, conspiracies and mystery.

A highly entertaining read full of darkness and danger.

I loved the many different characters and the narration was so skillful, so complex. I have listened to this several times and can't wait for part 3!

Great atmosphere but hard to connect with

My review for this book is going to be very similar to the first book. I love the atmosphere and the setting of this story. I think the characters are very clever, and yet, I still feel like I'm missing something. Its been hard for me to connect with the story for some reason, and I'm not sure why. There is a lot going on in the book, and the story moves at a fairly leisurely pace. I want to keep reading this series for the atmosphere alone, but I'm not left with as much satisfaction as I would expect. Maybe a bit more action, or a condensed storyline to move things along a little quicker. I listened to the audio version of this book narrated by Machelle Williams, and I liked her narration. Her voice fits very well with the character, and is pleasant to listen to.

Better than book 1 but still needs something

Note: This is Book 2 in the series and you really need Book 1 before enjoying this book.

Book 1 left me confused across the board. I wasn’t sure about the setting, I didn’t really get the main character, and the plot had so many little plots within it that I wasn’t sure that what I got was what the author intended. I did like this book better as it explained more of what was going on for all areas even if it didn’t clear everything up.

So I finally understand why Jacqui is going on about Joseph, who didn’t really put in an appearance in Book 1. Although that can easily lead to some silly love triangle….. Also the setting is much clearer. Alcatraz Island is mentioned more than once and also we learn there are other domed cities (which everyone knows about but somehow I missed in Book 1). There’s also references to an uprising and a collapse so I think we have a fallen human civilization where only domed cities can support large numbers of humans. Yet I’m still a bit confused about the time. The story reads like it’s set in Victorian times but with the collapse and references to a few pieces of tech, I feel like it’s set in a future time.

Anyhoo, the plot was a little more straight forward this time. Jacqui is still dealing with the fall out from the previous book. She conquered one villain but a second is untouchable. She has pressure from every corner. Her husband, Tony Spadros, truly cares about her but she doesn’t have the same intensity of feelings. Roy, Tony’s dad, is a sadistic control freak who enjoys hurting others. Then there are those that need her help. Anastasia has fallen on tough financial times and Jacqui agrees to help her. Toss in some child abuse, a few secrets, and a lost love or two and you have plenty to keep Jacqui busy.

There’s a lot of cloak and dagger in this tale and some of it is well laid out and some of it reads like it was tossed in spur of the moment. When things were well laid out, I felt like it was a good episode of Peaky Blinders with the organized crime, family on the rise, secrets, and occasional violence. At other times, I just rolled my eyes a little because it felt like some deceptions or secrets were tossed in just to add drama, like that big do about Jacqui being trained to fire a gun. It was part of her training in Book 1 but now in Book 2 her husband isn’t suppose to know that she’s ever fired a gun. It just came off as silly.

I think I know who Jacqui is now but I am still sometimes confused on her timeline. In fact, I haven’t even figured out why Roy Spadros had her dragged up from the Pot (poor man’s neighborhood), cleaned up, educated, and engaged to Tony so many years ago. It’s not a secret she comes from the Pot but it’s suppose to be a secret that she was forced by Roy to marry Tony. She had some of the best tutors but lacks even passing Italian (apparently, that’s the classy language of choice) and knowledge of the basic politics of who to invite to dinner (which can have political implications for the entire Spadros family). Again, it seemed a matter of convenience for the plot or for drama as to what Jacqui knew or didn’t know.

This tale ends with a wrap up to several questions even as it leaves the door open for the next book. This story felt more polished than the first book but still needs a bit here and there. 3.75/5 stars.

The Narration: Machelle Williams did an OK job. Her voices were clearer this time, each character being distinct and most of the male voices being masculine. Her pacing is still quite slow. She does do some regional accents for some of the characters, which I liked. There were no issues with the recording. 4/5 stars.

Now we come to book two in the Red Dog Conspiracy series, The Queen of Diamonds. This series is interesting to say the least. A neo-Victorian era; in city called Bridges where aristocratic crime families are at war with one another. At the center of it all is Jacqueline Spadros who was taken from her family and forced into a marriage with the Spadros family.

I will first write about the narration. Williams has done a great job with this series so far. I like her tone and the voices she gives to each characters. Her voice sounds so lovely to listen to and she does great with pacing her words! I will say sometimes the audio is confusing, because there are a lot of characters and moving pieces so sometimes I’m lost. That however doesn’t really have to do with her performance, just a thought I had about the series as a whole and how it can be confusing to listen to if you don’t leave off in a good place. I would give this audio a 5/5 stars!

For the story itself Patricia has a really exciting and crazy world. There is so much going on that I can hardly keep up. I like that feeling with stories I read that have a big mystery or a heist in them. I would like to experience more of it as the pacing of the overall story is a little slower than I would like. With the pacing being more drawn out I think it doesn’t allow us to get to certain things in a timely manner and have some things be overly explained. I am enjoying this big mystery and look forward to what comes next and what is revealed in the next story! I love her writing and the characters and world she has crafted. For me this is an exciting read, it just needs a little kick! I give the story a 4.5/5 stars!

The Queen of Diamonds

This book picks up right after the first one, "Jacq of Spades". Once again, we are following Jacqui Spadros as she delves into the underworld intrigues of her family.

The man she thought she had killed after the kidnapping of David Bryce is apparently still alive and causing problems. Add in Dame Anastasia and her fake jewels, the evil father-in-law and lots of secrets and you have another interesting installment in the Red Dog Conspiracy.

I have to admit that listening to these books is a little difficult at times because of all the characters. I'm sure if I was reading the actual words, it would be easier to follow the action. With that being said, it was still an enjoyable read.

These books are a unique mixture of Mafia-type families, steampunk and Sherlock Holmes. Never boring and always full of surprises, I look forward to many more installments of Jacqui's adventures.

The narrator does an excellent job and her performance adds a lot to the listener's enjoyment. I was given the opportunity to listen to this book by the author and chose to review it.