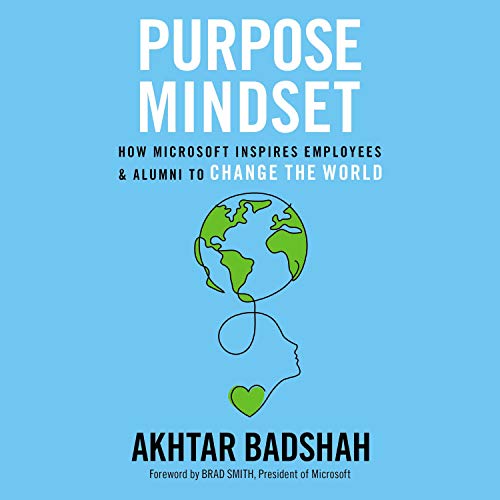 New research shows that today, more than ever, employees want to contribute to something greater than themselves. Learn the innovative strategies Microsoft pioneered that created a virtuous cycle of giving and volunteerism that has benefitted the company and fulfilled its employees while making the world a better place.

Early on in the Microsoft story, Bill Gates and other key executives met to decide how they would incentivize employees to make a charitable impact. The status quo at that time was to offer some small percentage of your paycheck as a pretax deduction to a charity selected by your company. Microsoft decided to do something revolutionary instead.

The Purpose Mindset tells the inside story behind how Microsoft built its culture of giving, including powerful stories from Microsoft alumni who were in the room when these decisions were made or who went on to make powerful change in the world, emboldened by their time at Microsoft.

The Purpose Mindset also tells the story of how this culture of giving that has been so successful at Microsoft in regard to job satisfaction, recruiting, and employee retention can be duplicated in your own work life, whether you are a business leader or you are seeking employment at a company that contributes to something greater than themselves.

Throughout this audiobook, charitably engaged alumni such as author Akhtar Badshah, the head of Microsoft’s Philanthropy program from 2004-2014, take listeners through the first-of-its-kind decisions that have empowered and incentivized employees:

What listeners say about Purpose Mindset