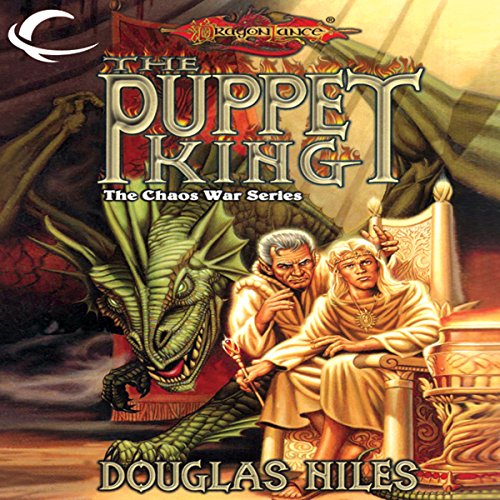 By: Douglas Niles
Narrated by: Clinton Wade
Try for £0.00

Treason within, war from without.

Torn asunder by the nightmares of a mad king, the elven realm of Silvanesti has nearly been restored to its former grandeur. But the elf Porthios, returning to his homeland, launches a rebellion against young Gilthas, his own nephew.

Gilthas's troubles are multiplied by threats from green dragons and from the Knights of Takhisis. Now, with Porthios at his throat, Gilthas must choose between blood and honor.

Douglas Nile's new Dragonlance novel is filled with treachery and intrigue among the elves during the Chaos War, the backdrop for The New York Times best-selling novel Dragons of Summer Flame.

What listeners say about The Puppet King

Once again, I am pleasantly surprised by the Chaos War series.

To be fair, the plot is a bit messy and some of the emotional aspects are rushed and not properly dealt with. In addition to the usual continuity problems that almost all Dragonlance novels have.

That said, however, I really enjoyed getting to see a little deeper into Porthios and Gilthas. As well as seeing the beginning of Gilthas's romantic entanglements.

All in all, I enjoyed and would recommend this book to any Dragonlance fan.

Great story truly enjoyed it way more than I thought I would especially with how slow it starts. Only down side was the once again bad voices and pronunciation of names by the narrator.

I came here looking for stories on Gilthas and the Lioness (two personal favorites) and found a much more intriguing tale. Porthios and Allahana take a large and fascinating chunk of the novel as well. I highly recommend this listen.