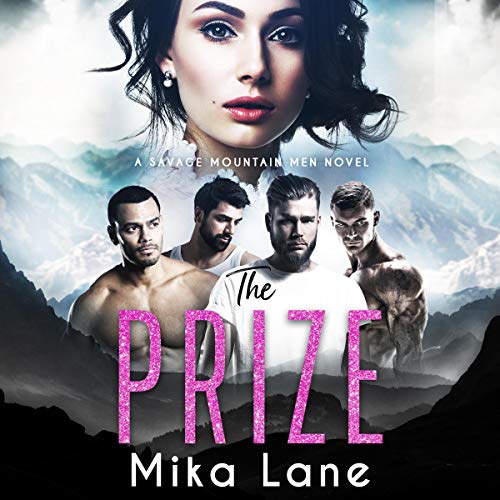 When four mountain mercenaries found me alone in a bar, in a dirty wedding dress, and with mascara stains under my eyes, deep into several shots of tequila, they had a few questions.

When they learned about the a-holes who used me in their quest to get ahead - who lied, stole, and tossed me aside like a piece of human garbage, they set out to exact revenge.

Those people, who exploited me and preyed on my innocence, should have just killed me because now they’re going to pay, thanks to my men.

My enemies became theirs.

My shame became theirs.

My body became theirs.

And my heart became theirs.

I got back what was mine, and then some.

You’re damn right it is.

This naughty, over-the-top romance includes four hulking mountain men with checkered pasts and doubtful futures, claiming the one woman they can’t live without. If you love outrageous stories with tough-as-nails ex-military dudes, this is the audiobook for you.

Please note: Books in this series can be read/listened to in any order. Enjoy!

What listeners say about The Prize

Oh this series has so many hunky Alpha’s. Great storyline and fantastic characters. Off the charts hotness. Excellent performance from Laurie.

Loved listening to the audiobook, the story was well written and the characters were interesting. When Alessia ran out of her wedding, only to meet four gorgeous Alpha males. It was so hot and steamy, with a lot of action, friendship, betrayal, passion/lust.
The narrator was clearly spoken and easy to understand.

A harem story should be heroine worshipping!

No depth to the characters. A lot of chapters on the back story and very little about the *ahem* climax. MFMMM, but not enough excitement between the characters to be anything interesting. Reverse harem seems like it would be more about the guys worshipping her, not just her pleasing them together, but that wasn't the case. Narrator was OK. 1.15%

I've enjoyed this series but had a hard time connecting with Alessia. She seemed pretty weak and for someone who is up on tv shows, it seemed a little far fetched that she wouldn't know what special ops or a mission are. Loved the alpha males.

Super sexy, not for the faint of heart.

Mika Lane writes super sexy RH that isn't for the faint of heart. If you like sex, alpha men, and a strong woman. These are the stories for you.

Alessia was whisked away from her car rental job to a reality dating show where America fell in love with her. So did the leading man. But when she discovered it was all a lie she took off, only to be rescued drunk still in her wedding dress by a man passing through. When she wakes up next, she discovers she's at his secret mountain home where he lives with his 3 best friends. After a few run-ins, a couple of botched escape attempts, and a mission to recover her pay, Alessia knows that one groom could have never made her as happy as her mountain men.

This book, like the series, follows the formula for a quick, over the top, insta-lust romance. Former military, now mercenary men. Dangerous, secretive life. One adorable sweet man, one gruff nasty/misunderstood man, two middlemen. This one added a dog. I loved Alessia's back story but I didn't like her lack of sense. I also thought there was too little development in the guy's characters. I felt like we didn't know one guy at all and another just barely. These stories entertain because there is a quick connection with the characters and they are hot. This one misses the mark.

hot and gritty and dramatic sizzling oh so sexy with hot big dominating men and one very lucky lady they care for her protector oh my I do so enjoy deliciously sexy taboo stories and this one hit the mark 5* all around the performance was great the story was great I loved every single word!!

This is a first in the reverse harem world for me. It was way better than I had expected. It was really good! I loved the way things developed in the story. It has me searching for more in the realm. The narrator did a great job!

I was given this free review copy audiobook at my request and have voluntarily left this review.
AudiobookObsession