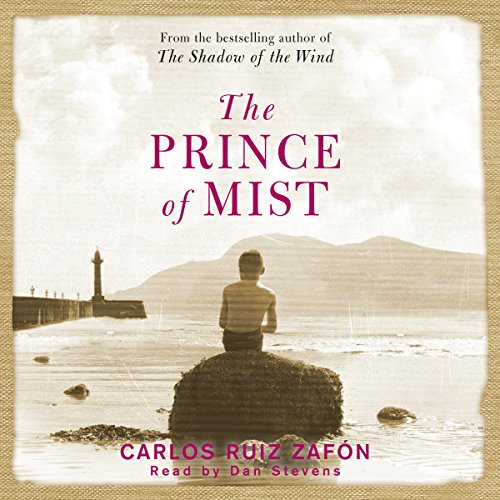 The Prince of Mist

By: Carlos Ruiz Zafón
Narrated by: Dan Stevens
Try for £0.00

Max Carver's father - a watchmaker and inventor - decides to move his family to a small town on the Atlantic coast, to a house built for a prestigious surgeon, Dr Richard Fleischmann and his wife, that was abandoned when the couple's son drowned in a tragic accident. Behind the house, Max spies an overgrown garden full of statues surrounded by a metal fence topped with a six-pointed star.

As the family settles in, they grow increasingly uneasy: they discover a box of old films belonging to the Fleischmanns; his sister has unsettling dreams and his other sister hears voices whispering to her from an old wardrobe. But Max spends most of his time with his new friend, Roland, who takes him diving to the wreck of a boat that sank close to the coast in a terrible storm. Everyone on board perished except for one man - an engineer who built the lighthouse at the end of the beach.

As they learn more about the wreck, the chilling story of a legendary figure called Prince of the Mists begins to emerge.

What listeners say about The Prince of Mist

Zafón can do no wrong!

I've been hooked on Carlos Ruiz Zafón since Shadow of the Wind, and this offering didn't disappoint! Great story, huge suspense, fantastically told!

Brilliant and a little unnerving

Another wonderful woven tale of mystery and intrigue. Skilfully read. A treat for young adults and not so young ones!

Another beautiful and spooky mystery from Zafon; I absolutely loved it. Only criticism would be that I wished it was twice as long!

Why did the narrator use a Welsh accent for theighthouse keeper.?Just didn't fit the story.

Perfect for a journey

Put this on during a school trip with a 5 hour journey - my S2 pupils were enthralled by the story (to my surprise), as was I.

Looking forward to more of his books for children being translated into English.