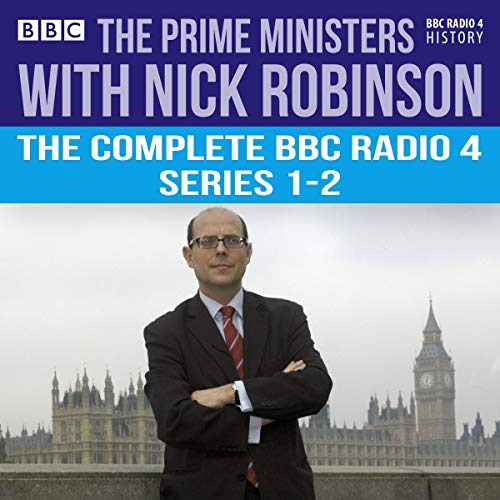 The Prime Ministers with Nick Robinson

In the complete series 1 and 2 of this fascinating and absorbing Radio 4 series, the BBC's Nick Robinson explores how prime ministers have used their power and responded to the great challenges of their time.

In the first series he explores the premiership of Sir Robert Walpole, the first and longest-serving prime minister; Lord North, remembered as the prime minister who lost America; Sir Robert Peel, who put national interest before party; Lord Palmerston, who cultivated a cavalier image and dominated mid-Victorian politics; Benjamin Disraeli turned his skills as a novelist to politics and became Britain’s first Jewish-born prime minister; David Lloyd George, Welsh radical, who set up the early welfare state, became a presidential PM in the First World War and split the Liberal party; Stanley Baldwin, the first prime minister to master radio broadcasting, his notion of Englishness shaped interwar Britain; and Clement Attlee, who lacked any charisma but created the modern welfare state and managed the big political beasts in his cabinet.

In the second series he takes a look at William Pitt the Younger, who became prime minister aged only 24 and held the post for almost 19 years in total; Earl Grey, who passed the Great Reform Act and abolished slavery in the British Empire; William Gladstone was our oldest ever premier and finally left Downing Street for the last time aged 84; Herbert Asquith, who had the longest uninterrupted spell in office among 20th-century prime ministers until Margaret Thatcher; Ramsay MacDonald, who became the first Labour prime minister in 1924, but seven years later came to be seen as a traitor by his party; Harold Macmillan took over from Eden after Britain’s humiliation in the Suez crisis, and whose upbeat approach earned him the nickname of ‘Supermac’; Harold Wilson captured the mood for change in the 1960s, but his two terms at Number 10 were increasingly dominated by Britain’s economic problems; and Edward Heath, who took Britain into the EEC (now the European Union) in 1973, which still divides opinion.

Extract from speech by Lloyd George: © British Library Board. All Rights Reserved.

What listeners say about The Prime Ministers with Nick Robinson

A fascinating account of the office and its holders. Interesting and informative - I really enjoyed it.

I've been a fan of Nick Robinson for a while. This series was what first brought him to my attention. Fine work by all involved. 10/10. Any fans of UK history will love this collection.