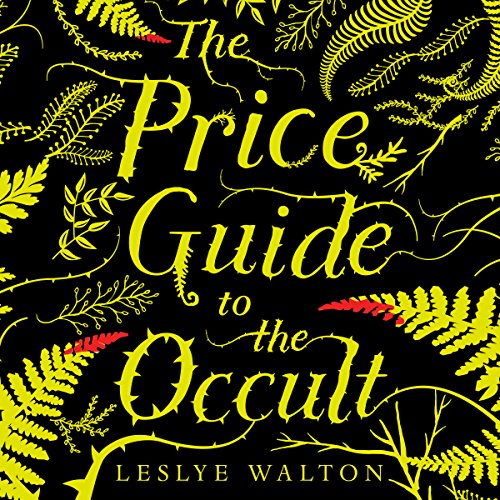 The Price Guide to the Occult

The Price Guide to the Occult

From the author of The Strange and Beautiful Sorrows of Ava Lavender comes a haunting maelstrom of magic and murder in the lush, moody Pacific Northwest.

When Rona Blackburn landed on Anathema Island more than a century ago, her otherworldly skills might have benefited friendlier neighbors. Guilt and fear instead led the island's original eight settlers to burn "the witch" out of her home. So Rona cursed them.

Fast-forward 100-some years: All Nor Blackburn wants is to live an unremarkable teenage life. She has reason to hope: First, her supernatural powers, if they can be called that, are unexceptional. Second, her love life is nonexistent, which means she might escape the other perverse side effect of the matriarch's backfiring curse, too.

But then a mysterious book comes out, promising to cast any spell for the right price. Nor senses a storm coming and is pretty sure she'll be smack in the eye of it.

In her second novel, Leslye Walton spins a dark, mesmerizing tale of a girl stumbling along the path toward self-acceptance and first love, even as the Price Guide's malevolent author - Nor's own mother - looms and threatens to strangle any hope for happiness.

This witchy story does not disappoint. It is not only magical but it also has a great family dynamic, well, for the most part. Seriously, there is so much to love but so much to dislike about her Nor's story, but only as it pertains to a certain significant person. I also had an issue with with the romance. Overall, it was wonderful but truth be told it took me a while to realize that I loved this story.

It wasn't until I was half way through that I realized how much I truly loved the plot. It was a bit diluted by the narration. The narrator is wonderful at bringing to life the side cheracters, but she seems quite detatched from the main character, Nor. Given that ~75% of the story is told from Nor's perspective, I really didn't enjoy her delivery of this cheracters. She has worked on many books, so inexperience is not the issue. I can only guess that because Nor's story is so sad, she decided to go about this performance in such a direction. I will definitely give her another shot, if I can find a book within the romance package.

I would definitely recommend this book, just not this audiobook.

I chose to download this because I loved the Strange and Beautiful Sorrows of Ava Lavender also by Walton. If you haven’t read it I HIGHLY recommend that you do ASAP if you’re at all interested in magical realism.
Overall I was pretty pleased with this book. I thought it was paced well and unraveled slowly enough to pique your interest but not too slowly so that your attention was lost. The imagery was beautiful. Nor was generally likable but for me the secondary characters stole the show. They were fun, quirky, and seemed relatable despite magic occurring around them. I also enjoyed how much effort was put into setting up the back story and how we continued to get small glances into the Blackburn history.
The only thing I wasn’t a fan of was the ending. I don’t need everything to be tied up in a neat bow but I would’ve liked a little more such as who the grinning man was.

Beautifully prosaic story depicting authentic family relationships and magic in the "real world." Rich character development and world building. Femme, witchy, sorrowful, touching. Leslye Walton is quickly becoming a favorite of mine.
Compelling narrator, very dynamic voice work.
10/10, will recommend to everyone
Now I'm asking myself if I should cover my body in fern tattoos.
Just kidding.
Clearly the answer is yes.