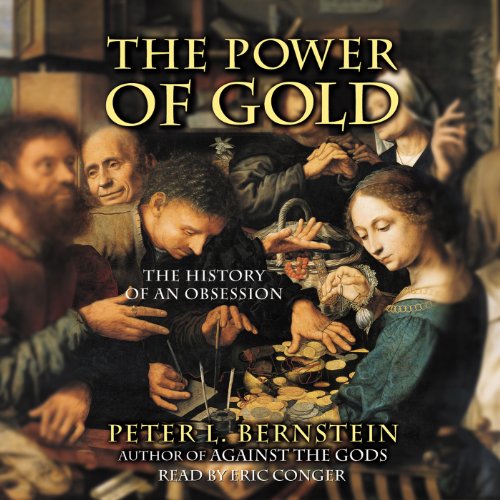 The Power of Gold

By: Peter L. Bernstein
Narrated by: Eric Conger
Try for £0.00

Peter L. Bernstein tells the story of history's most coveted, celebrated, and inglorious asset: gold. From the ancient fascinations of Moses and Midas through the modern convulsions caused by the gold standard and its aftermath, gold has led many of its most eager and proud possessors to a bad end. Gold had them, rather than the other way around. And while the same cycle of obsession and desperation may reverberate in today's fast-moving electronically-driven stock markets, the role of gold in shaping human history is the striking feature of this tumultuous tale.

This fascinating account begins with the magical, religious, and artistic qualities of gold and progresses to the invention of coinage, the transformation of gold into money, and the gold standard. The more important gold becomes as money, the more loudly it speaks of power. Ultimately, Bernstein confronts the future of gold in a world where it appears to have been relegated to the periphery of global finance.

Far more than a tale of romantic myths, daring explorations, and the history of money and power struggles, The Power of Gold suggests that the true significance of this infamous element may lie in the timeless passions it continues to evoke, and what this reveals about ourselves.

What listeners say about The Power of Gold

i have an interest in economics and history so the book was ideal for me. I rarely listen to an audionook that I expect to listen to again but would easily do this with the Power of Gold.

Good book and well researched but it does drag a bit. I have a degree in economics and it gives a nice history of the gold standard. However, the anecdotal mythological stories about gold in the beginning do not really mesh well with the rest of the story.

The Power of Gold is a great read

In a time of economic instability, many people turn to gold as a "safe port in the storm". This book is a great read telling about the history of humanity's love for gold.

Even though I've not studied economics I really enjoyed listening to this audiobook. Extremely informative, with lots of very interesting historical anecdotes, along with very easy to understand explanations: from the workings of the old Gold standard to how gold has under-pinned the financial systems of the world throughout history.

This is more than the history of gold- it's the history of money as well. I found it fascinating- although at times it was also rather confusing and impossible to remember all the details, and there were many.

In the end, if I truly want to grasp the material, I'll need to listen to it again. But fortunately, this is a book that I'd like to listen to again. That can't be said for most books I listen to.

The book starts off strong and ends rather strong but as with many books, it too lost me for a bit in the middle. Highly recommend it nonetheless.

One of my favorite books of all time!

I bought this book many, many years ago & have re-listened to it close to 10 times over the years. While it is non-fiction, the stories told about the history of gold make for fascinating listening. Having this 5,000-year perspective on gold gives me a clear idea of where gold is headed post-2019. And the author, Peter L. Bernstein, was a very credible economist. I have listened to many of his other books which are highly recommended, but this is my favorite for the content, the learning & most importantly the relevance in today’s environment of hyper money printing across the world!

The ancient history of gold was told very well. Where it failed was to explain clearly the economic issues pertaining to Gold in the 20th Century.

Would you recommend The Power of Gold to your friends? Why or why not?

Yes, the story of Gold turned out to be exciting.

A little bit slow and ponderous.

No. I expect the hard issues which I did not understand well will be glossed over in a film and the parts that would be an interesting film would be the parts I understood.

I was expecting to listen to something in the genre of Dan Carlin's Hardcore History podcast, but was sorely disappointed as the writing and the narration both drag and despite best efforts, I wasn't able to finish listening to this one