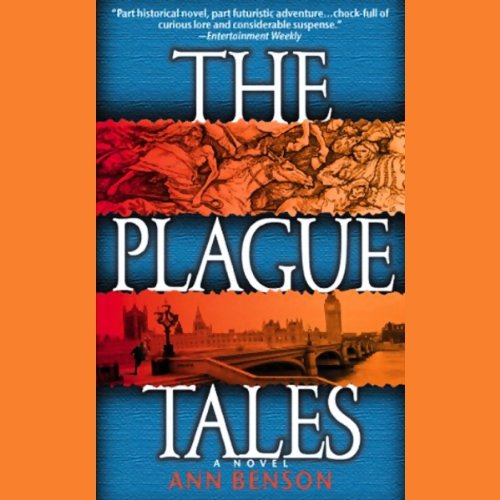 I found this program so terrific and fun to listen to, that after the six hours, I wanted to go back to the beginning and start over. I was captivated by how first-time novelist Ann Benson weaves together the historical and futuristic plots. Two parallel stories are presented: one an account of an unlikely and unwilling physician to King Edward III in 1348; the other a tale of London in 2005, a time when antibiotics no longer cure. What seals this as my staff pick is the riveting and often lyrical narration by British actress Juliet Stevenson. Her portrayals of the British, French, Spanish, and American characters here are completely convincing in tone, person, and accent. Highly recommended. (David O.)

Fourteenth-century physician Alejandro Guzman, caught performing an autopsy in Spain, flees across Europe at the time of the Black Death to escape execution for his heretical deed. When he arrives in the Papal city of Avignon, he is conscripted against his will to serve as a Plague Doctor in the court of England's Edward III.

Unfolding in a dramatic counterpoint is the story of American medical archaeologist Janie Crowe, in England at the turn of the 21st century to recover from the tragic loss of her family. She digs up a medieval artifact as part of her research and unwittingly releases a deadly plague bacterium on an unprepared world.

These two unwilling heroes from two different centuries are linked by history and defined by circumstance. Here are their stories - the plague tales.

“Harrowing... Will give readers both nightmares and thrills... A carefully woven page-turner from which...Robin Cook and Michael Crichton could learn.” (Library Journal)

What listeners say about The Plague Tales

A terrific read.......A blend of the historical & the 21st century, very well written & spell binding. I listened all in one day as I found I had to know what happened next.

The narrator is one of the best so far at Audible! This book is exceptionally well read by a narrator of many voices further enhancing the enjoyment of the story!

Don't miss this one!

In spite of drawbacks, like a couple of deus ex machina moments and some protocol-breaching yahoos as central characters--who make you wonder how the story's modern world could have survived so long without some devastating scourge overrunning it--I don't regret purchasing this book. The most rewarding aspect of the production is Juliet Stevenson's enthralling narration. Even when I was thinking, "oh, pleease" about the plot I was compelled to continue. I did feel as though something were missing from the plot. I'm not sure if it was because of the abridgement or not. All in all, if you can generously suspend disbelief, this book will kill a few hours for you.

No Plague of Realistic Details Here

I bought this book because of the narrator and Juliet Stevenson is delightful. I loved hearing the contrasty between her plummy British accent and the speech of the American characters, although her Spanish accent was awful and worse, distracting.

Too bad the book is so awful I had to put it down. The plot holes are enormous: e.g. the author expects us to believe that while this is a society that has dealt with devastating "outbreaks" of a bacterial nature such that going through customs involves intrusive medical examinations and the US government is forcing surgeons to become forensic somethingorothers, a lab technician with a history of security/protocol lapses is allowed to work with biological samples. Or that people in this world - including a surgeon turned forensic somethingorother and the aforementioned lab tech - would see an unidentified bacteria on a sample and talk about how pretty it is and name it Gertrude, rather than, oh, I dunno, enclosing it in something so that it can't be splashed by any big bad bacteria.

I could only listen to 1/3 of the book before the plotholes drove me nuts - and according to the reviewers on Amazon.com, that was the good part of the book. Save your money and time.

Abridged books are the worst!

This might be a good story. Hard to tell from this chopped up mess. Why does Audible bother with abridged novels? My fault I should have checked more closely. It was only when things simply didn’t make sense, that I realized my mistake in downloading this.

I have read the paper book 3 times and the story is fascinating. I was disappointed that the audio version was abridged as many of the interesting story lines were cut short in this version.

Read the book in high school and once I started listening I realized how much I had forgotten. Still my favorite!

I absolutely love this book!! I've always had a fascination with history during the Black Plague breakout. And I have always had been in love with the idea that somewhere along the line of our lives, we accomplish something that will be useful to someone years down the road. To bring these two things together in such a great story telling of near future and distant past..., I was in heaven!
The story was entertaining, interesting, and fascinating. The storytelling was well done and wonderful to listen too. Highly recommended!! PLEASE BRING MORE ANN BENSON BOOKS TO AUDIBLE!!

Definitely Good for a Rainy Sunday

I'd love to take a look at a copy of this book to confirm my theory, but I'm pretty sure that it's a better listen than it is a read. Benson's simple narrative style is enriched immeasurably by Juliet Stevenson's diverse and intelligent reading. The author takes us to some interesting periods in history, nimbly jumping from century to century as the tale weaves dexterously in an out. An enjoyable listen for a rainy Sunday afternoon.

The two tales are excellent and the narration is top notch. My only complaint with this audio book was the abridgement. Certain, seemingly significant, plot lines were briefly mentioned in places but never explained. I'm tempted to look at a print edition just to see what I missed. Even with this annoyance it was time well spent.