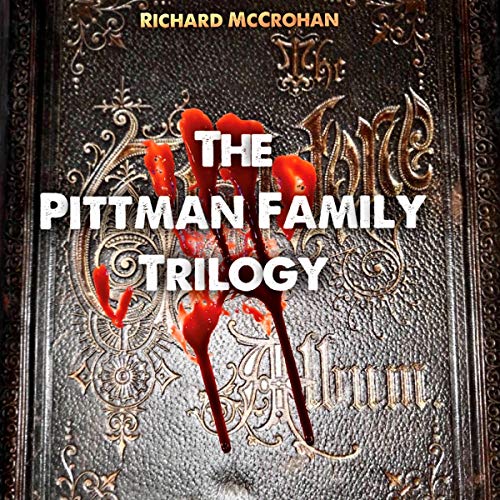 By: Richard McCrohan
Narrated by: Skyler Morgan
Try for £0.00

This compendium contains all three novels of the Pittman Family Trilogy.

Family Ties: In 1961, 10-year-old Richie met the new boy in school, Joey Pittman. A school bully brings them both together, and they soon become best friends. Joey lives with his father in his grandmother’s large, old house at the end of town. As Richie spends more and more time there, he meets the large extended Pittman family. But the Pittmans aren’t your usual family. They are very different and very dangerous. After a couple of years a suspicious incident occurs and the family disappears, Richie learns the family’s secrets. But they will follow and torment him the rest of his life.

Family Secrets: It is now 2019. Richie’s family is grown and he is living in Florida. Still in terror of the Pittmans, a chance meeting with a group of friends leads Richie to a possible way to end the family’s demented grip on his life. But his delving into their secrets has not gone unnoticed. Soon, Richie and his new friends find themselves in a deadly life and death struggle for survival.

Family Plots: More than a year later, Richie finally feels free of the viciousness of the Pittman curse. But when two well-known journalists show up at his door wanting to write a book about the infamous Pittman family, the remaining family killers return to finish their game of death for once and for all.

What listeners say about The Pittman Family Trilogy

I picked up this book along with The School Bus from Richard McCrohan. I enjoyed both of these novels. The storyline was great and it had the right amount of horror along with relatable characters. I would defiantly recommend.

Don't mess with the Pittmans

This trilogy starts following Richie as a young boy. He meets his childhood best friend and is accepted with his family. As he grows he starts to notice things that seem a bit odd about the family. When Richie figures out what's going on its already to late. The Pittman's are nothing to mess with!

A perfect mix of horror

Following Richie though the wrath of the Pittman's was nothing short of an excellent adventure. The characters and story were well executed and, as a horror fan, I was not left disappointed. The narrator did a great job handling the many characters. I would suggest this audiobook to any horror or fiction lover!!

Excellent stories!I was not expecting the world this book laid out for me.It is how one boys friendship is affected by a friend he has in elementary school who suddenly moves.Terrible coincidences follow this family wherever they go.You do not want them keeping an eye on you! Skylar Morgan was a terrific narrator.I was given this free review copy audiobook at my request and have voluntarily left this review.'

This book is an interesting and terrifying idea - what if serial killers were able to "spot" each other during random daily interactions and form a sort of serial killer underground railroad?
If you enjoy this genre, you'll love this book. It's fiction with multiple actual serial killers blended in. It's terrifying, a bit sickening, and super fast-paced. It's a very well-written book that keeps you pulled into the story of a young boy who sees something he shouldn't have at a neighbor's abandoned house and how it follows him throughout his entire life.
The narrator did a really good job bringing the characters to life. There were a few mispronunciations sprinkled in (continuity, incongruous, contemplative, larynx...), but that's probably just the sensitivity of my own ear due to my profession.
Both author and narrator are very talented and will be interesting to watch in the future.
I requested this audiobook to review in exchange for an honest review.

Love that it intertwines real history with the story by using real life incidents and people. One downside to this is when the information is wrong. I would understand if they tweaked history for the sake the story but some of it was just bad editing, such as Toole being convicted of Adam Walsh’s murder. He did confess but it was never taken to trial because lack of evidence and Toole recanting his confession. There were a couple other instances like this that kind of took me out of what was otherwise a very immersive story because of the use of real history.

A horror audiobook to love

I usually don't listen to books in this genre, however, I thought I would give this book a chance. I ended up loving it. It has an engaging storyline and fun characters. It follows the life story of Richie as he has to deal with a family that comes back to haunt him. The narration was pretty good. I'm not sure if I will stay in the horror genre but I will defiantly check out some more of Richard McCrohans work.

This book series was pretty creepy because it actually seemed totally believable. This isn’t a genre I normally listen to, but I really enjoyed it. It started out pretty normal and I kept finding myself thinking, this is it, this is where the bad stuff happens. But, it didn’t. Then the end got pretty intense, and left you wanting more. Luckily, I had the whole trilogy at once, so, I dived right in to book two. Again, there was a lot of suspense. I spent a lot of time getting nervous because I don’t really like gory stuff and I kept feeling like it was about to happen. And sometimes it did. And then, there’s book three. Oh my. That was super suspenseful! I won’t say more, because I don’t want to ruin it for you. Although I was sad about certain aspects of the ending, I was definitely satisfied with it.

As for the narrator, he was good. He had a deep voice so his female voices were a bit gruff, but I honestly didn’t even notice that until book three. He enunciates well, and shows great emotion. However, he mispronounced simple words and that really drove me crazy. Album became alblum, deprecating became depreciating, and notorious was noctorious. And that was just a small sampling of the numerously mispronounced words. And the words were mispronounced over and over again, always the same way, so it wasn’t just a moment of being tongue tied. It was weird. But not weird enough to ruin the books.

Overall, this was a great series and I would definitely listen to books by this author again.