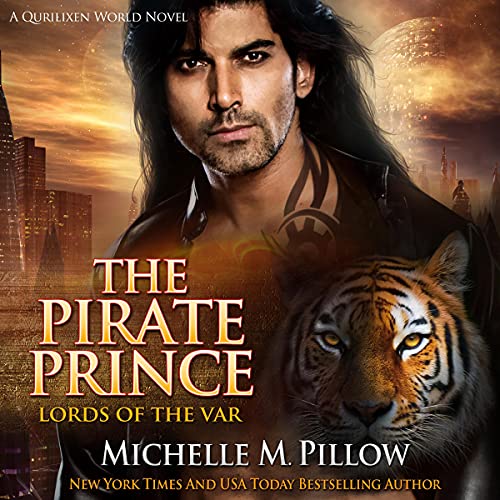 By: Michelle M. Pillow
Narrated by: Michael Ferraiuolo
Try for £0.00

"A woman has the potential to be the ruination of men and kingdoms. The only question is, my son, will you let one ruin you?" - King Attor of the Var

Prince Jarek has no official title in space. Known simply as Captain to a misfit crew, he sails the high sky doing what he pleases. That is until one of his men is kidnapped by intergalactic drug dealers. Now he's on a mission to save his wayward friend. But instead of a crew man, he rescues a woman desperately trying to be free of her master. Or so he thought.

Princess Zhang Mei has just been told her future by a seer. It seems fate has given her in marriage to Prince Song Lok - future ruler of the only other dynasty on her home planet of Líntian. She will do her duty to her family, but first she wants something for herself. And when the pirates come to steal, she knows exactly what she wants that something to be - her.

About the series: The cat-shifter princes were raised to not believe in love, especially love for one woman, and they will do everything in their power to live up to their father's expectations. Oh, how the mighty will fall.

What listeners say about The Pirate Prince

I didn't want this to end!

loved the entire series, such a shame it's finished. the stories are great, well done Michelle. however, plaudits have to go to Michael Ferraiuolo, his narration is one of the best around. The brothers' accents are adorable, so sexy. I could listen all day. It's going to be a long wait for the audible versions of the next series. please hurry up! I hope Michael continues as the narrator.

I was disappointed in this last installment of the Var series. This story was just missing some of the passion that the other stories had. Not the ending I was hoping for ...uggghh!

I have enjoyed this series and loved the prince's and their women. I've listened to books 1 thru 4 several times but this book was disappointing. Half the book is reviewing what happened in the other books. Take out all the repetitiveness and you have a good 3 hour story.

Worth a credit/$$ not for me. I'm returning this one.

This was a unusual story. It had pirates that were Princes and princesses that were not what they seemed. Intriguing situations all around. I really enjoyed this book. Hope you do too.

This book was soon much better than the last one. Nice ending to all of the princes tales.

Would you listen to The Pirate Prince again? Why?

Yes I would I love this series and this book is just as enjoyable as all the others.
And the narrator is spot on.

What was one of the most memorable moments of The Pirate Prince?

I have 2 parts actually. When Prince Jarek realizes he lost a crew mate and picked up a female haha.

When Princess Mei learns that she is to be a mother

I loved the entire story. I think for me it's learning more about Jarek the lone ranger so to speak and to know he has a heart of gold.

I have truly enjoyed this series although I think I missed one so I must grab that.

If you could sum up The Pirate Prince in three words, what would they be?

Prince Jorvik- He behaved like we want our princes to.

Very good. I enjoy the voices he does.

Loved it but it was a bit short.