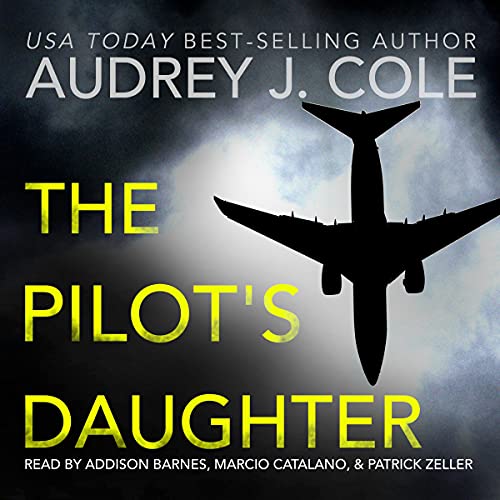 Welcome aboard Pacific Air Flight 385, with nonstop service from Seattle to Honolulu.

Cora is scared to fly again after her husband died in a recent helicopter crash in Pago Pago.

A thousand times she has told herself to turn around, not get on the flight, go back to her young children.

But now, she’s seated in first class across the aisle from the girlfriend of a famous billionaire pharmaceutical entrepreneur.

Halfway across the Pacific, the flight is hijacked. Six people are dead - including the pilots.

Cora is a young widow, mother, and emergency room nurse...but as the world closes in around her, she’s also a pilot’s daughter.

Lost off radar in the middle of the vast Pacific Ocean, the motive behind the hijacking remains a mystery. Not knowing who to trust, Cora works with the man seated beside her, Seattle Homicide Detective Kyle Adams, to save herself, along with the remaining 154 souls on board.

What listeners say about The Pilot's Daughter

More than just a pilot's daughter

Oh wow, I loved this book. It's the type of book that once you start you have to keep listening to find out what happens next but at the same time you don't want it to end. To say I was hooked was an understatement. The story is told by multiple characters which adds to the tension because you know who to trust and are left wondering how long before the hero's figure it out. i It's no stop action and the author really helps create the illusion you too are trapped along side the other passengers as they find themselves caught up in one situation after another, this book must have taken a lot of research and it shows. The characters are just as interesting and somehow I found myself wishing for a happy ending for some of the bad guy's too. Just a great book that I really enjoyed and even recommend to my mum.
For Cora the last thing she wanted to do was leave her children behind and travel on an airplane, especially as her husband died in a helicopter crash but when a some village is honouring his name by naming a school after him and all his hard work the least she can do is take a week away from her life. She is joined by one hundred and fifty-four passengers, including a billionaire pharmaceutical giant's girlfriend and a homicide detective tracking down a fugitive. Before they reach there destination however two men pull out guns and bullets begin to fly. When the dust settles the hijackers and some of the flight crew are dead. With nobody left to fly the plane the passengers must rally around to save themselves and Cora as the daughter of a pilot will have the hardest job of them all. But is the threat really over?
I really liked the use of multiple narrator's and thought it really enhanced the listening experience, especially the use of a few accents.
Five stars all round.
I was given this free review copy audiobook at my request and have voluntarily left this review.

I enjoyed that there were a male and two female narrators. It adds to excitement of hearing the story. I appreciated it being able to guess what was happening next and why things were unraveling. My Bookclub read this and I’m sure when we get together we will talk for at least an hour about the twists and turns of this story.

This was the best audible narration I have listened to so far. The use of three different voices, including female and male narrators, was outstanding. They all three did fantastic work.

I enjoyed the story and finished it in just two days. Every aspect was very realistic and timely. The ending fell a little flat for me however.

Couldn’t stop listening! Wish there could be a sequel! Loved the characters and the excitement!

Stilted Thru and Thru!

Don't do it, just don't. If you want an excellent story with exceptional narration about a hijacking -- get Hostage by Clare MacIntosh. That story is multilayered and exceptional. This one has wooden narration of a weak story that is full of holes.

Couldn’t put it down

This book owes me a nap because I couldn’t stop listening to it last night until it was over. So good! It had my attention almost immediately. Likeable characters, fast-paced plot and enough surprises to keep you guessing. I’m looking forward to reading other books by this author.

Edge of the seat GOOD!

This was one of the best books I’ve listened to. You are anxiously looking to hear what happens in the next chapter. The author keeps you completely engaged. The story is riveting. It’s a MUST LISTEN in my opinion. You will not be disappointed.

I listened for hours unable to put this book down for even a second! Great characters, solid plot and good suspense. I only read a few authors but I have added her to my list!!!

The book covers various passenger stories on a hijacked plane and how they interlink with one another. The story was interesting and action-packed and I was eager to hear how it unraveled. The narration was entertaining and I enjoyed the story overall. This book was given to me for free at my request and I have left this objective review voluntarily.

The Pilot’s Daughter was another great read by Audrey J. Cole. Cora has been afraid to fly again after her husband died in a helicopter crash. She finds herself seated in first class across the aisle from a famous billionaire pharmaceutical entrepreneur’s girlfriend. The flight is hijacked halfway across the Pacific. Six people are dead and that includes the pilots. Cora is an emergency room nurse, who just so happens to be a pilot’s daughter as well. Cora works with the man who was seated beside her to save all the passengers on board. He is Seattle Homicide Detective Kyle Adams. I really enjoyed this book and cant wait to read more by the author.

This fast-paced story is brought to life with excellent narration. I love how there is both female and male narrators. 5 stars!