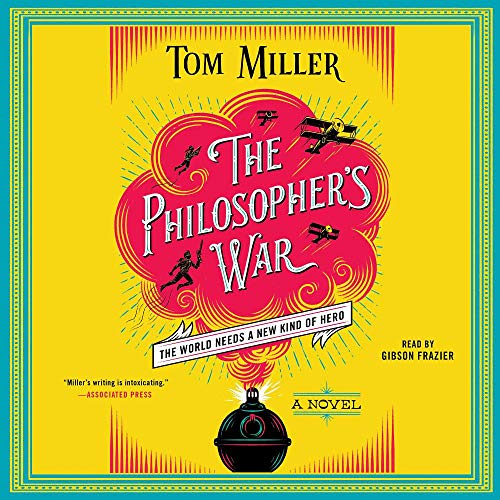 By: Tom Miller
Narrated by: Gibson Frazier
Try for £0.00

The “propulsive follow-up to emergency physician Miller’s imaginative debut, The Philosopher’s Flight” (Kirkus Reviews, starred review) finds Robert Canderelli Weekes as a rookie Rescue and Evacuation flier on the front lines of World War I in France. He came to save lives but has no idea how far he’ll have to go to win the war.

Thanks to a stunning flying performance and a harrowing shootout in the streets of Boston, Robert Canderelli Weekes’ lifelong dream has come true: He’s the first male allowed to join the US Sigilry Corps’ Rescue and Evacuation service, an elite, all-woman team of flying medics.

But as he deploys to France during the waning days of the Great War, Sigilwoman Third-Class Canderelli learns that carrying the injured from the front lines to the field hospital is not the grand adventure he imagined. His division, full of misfits and renegades, is stretched past the breaking point and has no patience for a man striving to prove himself. Slowly, Robert wins their trust and discovers his comrades are plotting to end the Great War by outlawed philosophical means. Robert becomes caught up in their conspiracy, running raids in enemy territory and uncovering vital intelligence. Friends old and new will need his help with a dangerous scheme that just might win the war overnight and save a few million lives.

But the German smokecarvers have plans of their own: a devastating all-out attack that threatens to destroy the Corps and France itself. Naturally, Robert is trapped right in the thick of it.

The Philosopher’s War is the electrifying next chapter in Robert Weekes’ story, filled with heroic, unconventional women, thrilling covert missions, romance, and of course, plenty of aerial adventures. The second audiobook in a series “that grabs readers from its opening lines and doesn’t loosen its grip or lessen its hold all the way through” (Associated Press), Tom Miller again brings Robert’s world to life with unrivaled imagination, ambition, and wit.

What listeners say about The Philosopher's War

I d I didn't want to like this book.

the narrator was the only reason I made it past the first three chapters and by then I was hooked. Thanks to the author fpr.an interesting story that shoes the grit and ugliness of war, fought with the practically of women.
Sometimes the story gets a little bogged down with the details frequently seen in war novels, but the humanity of the characters carries it through.
Quite different from your typical summer novel and worth giving it time to get started.

Tom Miller really outdid himself with the first book in this series and the second book is by no means a let down. It improves on characterization for Robert Weeks and introduces more of the backstory for experimental weaponized sigilry.
The only potential issue is with pacing. Things feel like they could have realistically happened but they do feel rushed. This rush is felt primarily at the end of the book. It is not a dealbreaker and a slight hiccup in the progression.

I can't wait for more books in this series and world. Extremely interesting concept with tons of future potential.

Would be an incredible TV adaptation opportunity a la Stormlight Archives and Mistborn.