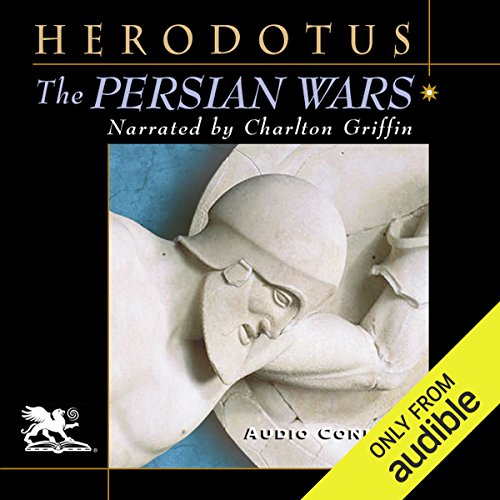 By: Herodotus
Narrated by: Charlton Griffin
Try for £0.00

Unquestionably, Herodotus has left mankind one of the world's greatest works of literature. The Persian Wars is part history, part geography, part anthropology...and completely entertaining. It possesses a charm that is legendary. But, over and above this, Herodotus has succeeded for all time in brilliantly expressing the conflict between the ideal of the free man defending his liberty within a state based on the rule of law, and that of the despot who bases his rule on brute force and whose subjects are considered slaves. In his writing we experience the impact of that great intellectual, moral, and ethical force that set the Greeks apart from the rest of the Ancient World. The Persian Wars is a magnificent epic of human triumph over the forces of tyranny, of the struggle over two diametrically opposed concepts of government...between which man must still choose today.

What listeners say about The Persian Wars

Enjoyed the content and performance very much. Herodotus is like an anthropologist in his descriptions of the many cultures he covers.

I was throughly surprised by the clarity of this work. Truly a remarkable book. Always a great narrator.

Another winner by Charlton Griffin.
You, sir, should be knighted by the Queen.
All of these audiobooks by him are hits.

very good if you skip through the geneologies

very good. skip through the genealogies and lists of different peoples. great read. very accurate and interesting a must-read if you're into history

the English narrator was annoying. He spoke with an Oxford accent and pronounced many of the in typical English annoyance.