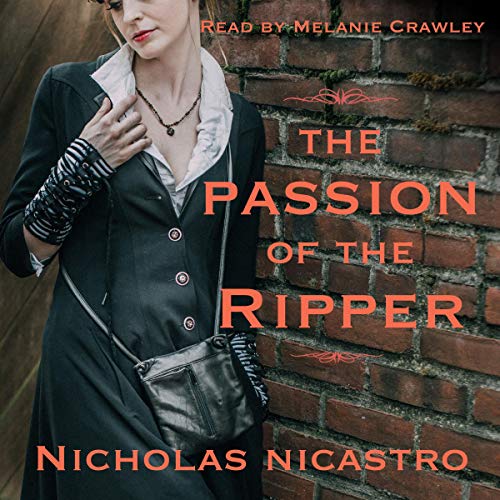 The Passion of the Ripper

By: Nicholas Nicastro
Narrated by: Melanie Crawley
Try for £0.00

In the chilly summer of 1888, the city of London is introduced to an innovation in evil.

A brutal series of murders of London’s most vulnerable women casts the city into a frenzy of fear and suspicion, pushing it to a state of panic not seen in centuries. Jack the Ripper has arrived.

When Scotland Yard begins to find traces of Jack’s handiwork in a string of seemingly unrelated killings, will the world’s most notorious serial killer be caught at last?

This is a different kind of Ripper story. Not just a whodunit, but an unflinching exploration of the killer, his city, and his times. It tells this well-known mystery from the inside out, from the points of view of the police, his final victim, and the man who - years later - became the prime suspect. For, Jack’s career didn’t end with the horrific murder of Mary Jane Kelly. With something wicked lurking around every corner, The Passion of the Ripper is a devilishly dark thriller, perfect for Ripperologists and mystery fans, alike.

Praise for The Passion of the Ripper:

"More than a grisly murder thriller. The story Nicastro tells is a poignant romance...turning bloody legend into heart-aching tragedy. Nicastro has written an engaging page-turner that lays bare the minds of Victorian London." (Tompkins Weekly)

"A strong new entry in the world of Ripper fiction." (Ripperologist)

Nicholas Nicastro was born in Astoria, New York, in 1963. He has a BA in English from Cornell, an MFA in film-making from New York University, an MA in archaeology, and a PhD in psychology from Cornell. His writings include short fiction and travel and science articles. Among his published novels are The Isle of Stone: A Novel of Ancient Sparta, Ella Maud, and Empire of Ashes.

What listeners say about The Passion of the Ripper

Good Perspective to the Ripper

A different look and perspective to Jack the Ripper, as I think everyone knows the story by now, listening to this I was none the wiser as to who actually killed all those prostitutes and displayed them, putting them on show and after all this time we will never know as I'm not sure that any DNA would ever survive and who could you match it too if there was any. However, I did find the ending more exciting than the actual ripper story in this instance.
The narration was by Melanie Crowley lovely clear voice but I thought a male voice perhaps would have been better with this type of story but that is purely my opinion.
I have read a couple of the Ripper Books this my first of an audio version, now I believe it's time to put it to rest as it just keeps going round in circles. and how many versions of the same story can one take.

A different approach to a well known story.

This was an interesting and very different presentation of the facts surrounding the murders of “Jack the Ripper”. Exactly as the author set out to present. It’s as credible a theory of who “The Ripper” actually was as any other I’ve read. But sadly we’ll probably never truly know for sure. So along with that fact and a small part of the narration I’ve given an overall rating of three stars. The narrator Melanie Crawley has a lovely voice and her characterisations were excellent, especially Mary Kelly and Bill. But her delivery of the book’s narrator was definitely not for me. It undoubtedly distinguished the narrator from the participants, but I founding stilted and uncomfortable. A small highlight of the book was the touching ending.

I loved this audio. If like me you love delving into the story of Jack The Ripper and still hold on to the hope we will one day get to the bottom of this mystery then this audio is for you. It’s a fascinating and well researched story’s with an exciting conclusion and did not disappoint.

Interesting take on a familiar case. I thought the narrator was excellent. Her various character voices were distinctive and I look forward to listening to more of her work.

Thrilling Version of a Classic Mystery

'The Passion of the Ripper' is a fascinating and unique telling about the infamous and mysterious Jack the Ripper. Nicastro's weaving of the story is engrossing as is Melanie Crawley's outstanding and enthralling narration. I highly recommend this audio book to everyone looking for a fresh and exciting telling about, arguably, the most famous unsolved mystery of all time.