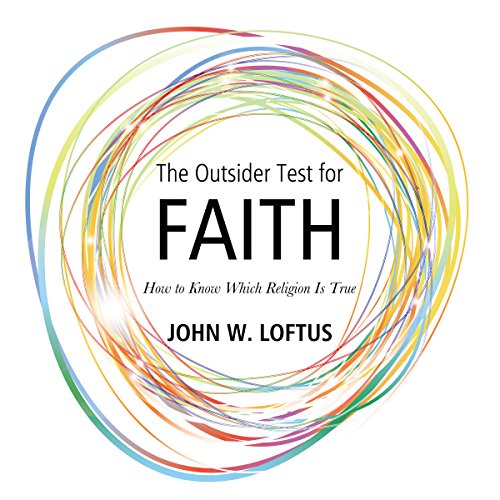 The Outsider Test for Faith

How to Know Which Religion Is True
By: John W. Loftus
Narrated by: Rich Miller
Length: 8 hrs and 3 mins
Categories: Non-fiction, Social Sciences
5 out of 5 stars 4.8 (4 ratings)

The Outsider Test for Faith

Depending on how one defines religion, there are at least thousands of religions in the world. Given such religious diversity, how can any one religion claim to know the truth? Nothing proposed so far has helped us settle which of these religions, if any, are true - until now.

Author John W. Loftus, a former minister turned atheist, argues we would all be better off if we viewed any religion - including our own - from the informed skepticism of an outsider, a nonbeliever. For this reason he has devised "the outsider test for faith". He describes it as a variation on the Golden Rule: "Do unto your own faith what you do to other faiths." Essentially, this means applying the same skepticism to our own beliefs as we do to the beliefs of other faiths. Loftus notes that research from psychology, anthropology, sociology, and neuroscience goes a long way toward explaining why the human race has produced so many belief systems, why religion is culturally dependent, and how religion evolved in the first place. It's important that people understand these findings to escape the dangerous delusion that any one religion represents the only truth.

At a time when the vast diversity of human belief systems is accessible to all, the outsider test for faith offers a rational means for fostering mutual understanding.

Excellent critical thinking skills. I see my faith in a new light now. i loved this book.

A true takedown of Christianity

One of my all time favorites regarding religious pluralism and the problems it presents in the presence of so much controversy.

A lot of time defending OTF

This book is mostly him defending the OTF against apologists. He goes through and refutes every argument against it. There are some weird ones. The actual explanation of the OTF is relatively brief. In an audiobook, I was wishing I knew where he presented it formally, so I could go back and read it. The chapter where he applies it to Christianity (chapter 11 in the audiobook menu) is really good.

Easy to finish, pretty enjoyable. I liked this book, just made me wish I was reading "A Manual for Creating Atheists". If you have already read that one, then give this one a go.

i love the perspective it teaches. I've done this many times but never had a name for it till now.