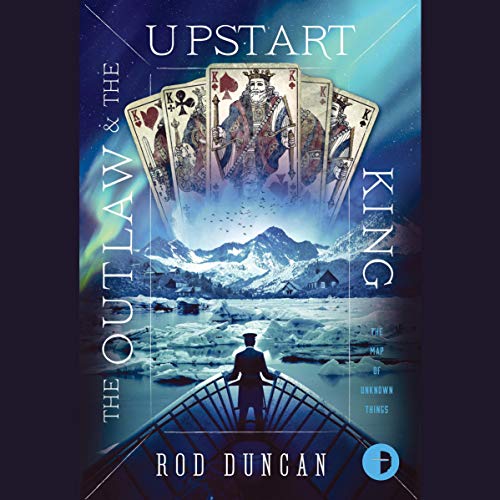 The Outlaw and the Upstart King

By: Rod Duncan
Narrated by: Elizabeth Sastre
Try for £0.00

Elizabeth Barnabus returns, to uncover the secrets and mysteries of the Gas-Lit Empire, in the startling sequel to The Queen of All Crows.

As it is inked, so shall your oaths and bindings be.

Tattoos are the only law on the Island of the Free, and there can never be a king. Every clan agrees on that. But a returning exile has smuggled something across the water that could send the old ways up in flames. Elias wants revenge on the men who severed his oaths and made him an outlaw. But, if his wealth and honour are to be restored, he'll need help from the most unlikely quarter - a mysterious woman, landed unwantedly on Newfoundland's rocky shore.

What listeners say about The Outlaw and the Upstart King

My anticipation of this novel was not matched by my enjoyment. I absolutely and unequivocally LOVED Rod’s previous books, especially the Queen of all Crows. I appreciated the imagination and creativity which went into the world building and the proactive nature of Elizabeth.
However, this story is set in an all too familiar bleak world of violent testosterone fuelled tribal conflict. Elias, a new and frankly unremarkable character does a lot of wandering about on blasted heaths in the rain, pursued by characterless thugs. Elizabeth is relegated to a passive also ran and poor Julia spends the whole book in a remote cottage.As always, the writing is excellent, descriptive and pacy, but the subject matter and world in which it is set just didn’t appeal to me.

I loved this whole series and each book better than the last. But loving Elizabeth Barnabus means I want to see more of the quick thinking, disquise wearing detective. I hope there is another book soon. This book was darker and had more violence but still it was a clear portrayal of the characters persona.

Not as good as the other books

Up until this point I have really enjoyed the series of books. However, this tale fell short for me and the change in narrator really didn't help. All the narrators' voices sound the same.

I love these stories - even now they are no longer in the Gas Lit Empire. This one is set in warlord-controlled Newfoundland and this time Elizabeth shares the lead role with a new, equally original character. The plot is intricate but carries you along. The characters and settings beautifully drawn.
I loved it - brightened up my coronavirus isolation no end!

In some ways disappointing because we see rather less of Elizabeth than before, this is nevertheless a return to form after the far fetched pirate story that came before. As a mature reader, I usually cringe when I try to read or listen to fantasy novels for their corny action, plot holes and unconvincing characters but Rod Duncan's writing is a rare exception (in fact I can't think of any others except Joe Abercrombie).

Worth a listen but quite brutal do not good for younger listeners.

What an epic and brutal story. The story is completely compelling and whether you are enjoying it or not, you have to keep listening.

Slight disappointment that the main character from the previous books was made out to be, in my opinion, quite rash in her decision making putting her friends in danger however extreme danger can do that I suppose.

Some of the detailed descriptions of the removing of oath marks was wince worthy. In some cases necessary for portray the character of the upstart king and how he controls people, but there are a couple of chapters that are a bit full of gore.

Worth a read as in itself it was a great listen, but don’t expect it to follow truly from the previous book.

Good Narration. The story was not as good as any of the Gaslit Empire trilogy. However I will look forward to the next in the series to follow Elizabeth's adventures.