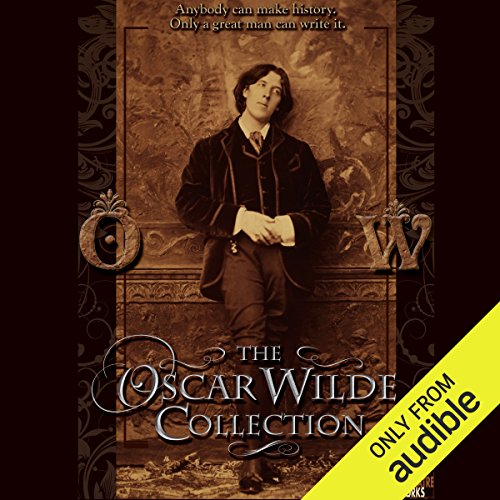 Four classic comedies from one of the wittiest playwrights in Western literature: Lady Windermere's Fan, A Woman of No Importance, An Ideal Husband, and The Importance of Being Earnest, all featuring star-studded casts with the likes of Jacqueline Bisset, Miriam Margolyes, James Marsters, Alfred Molina, Roger Rees, Yeardley Smith, Eric Stoltz, and many more. This audio also includes a chilling dramatization of Wilde's sole novel, The Picture of Dorian Gray.

A Woman of No Importance:
Devilishly attractive Lord Illingworth is notorious for his skill as a seducer. But he is still invited to all the "best" houses while his female conquests must hide their shame in seclusion. In this devastating comedy, Wilde uses his celebrated wit to expose English society's narrow view of everything from sexual mores to Americans. Stars Rosalind Ayres, Jane Carr, Peter Dennis, Judy Geeson, Paul Gutrecht, Martin Jarvis, Cherie Lunghi, Robert Machray, Miriam Margolyes, Samantha Mathis, and Jim Norton.

An Ideal Husband
A tender love story, a glittering setting in London society, and a shower of witticisms are only a few of the reasons this play has enjoyed hugely successful revivals.

"Fans of Oscar Wilde will delight in this collection of four of the author’s best-loved plays and a theatrical adaptation of his only novel. These full-cast productions - Lady Windermere’s Fan, A Woman of No Importance, An Ideal Husband, The Importance of Being Earnest - feature energetic performances from a host of talented actors including Eric Stoltz, Martin Jarvis, Alfred Molina, and Jacqueline Bisset. Razor-sharp comedic timing from all the players will entertain listeners while the production of A Picture of Dorian Gray offers a darker pleasure and a cast that delivers a taut, suspenseful performance." ( Publisher's Weekly)
"The smart direction and casting and well-executed musical scores are a boon to the production, which will keep audiences laughing and engaged through multiple listens." ( Library Journal)

What listeners say about The Oscar Wilde Collection

I love Oscar Wilde although disappointing to not have the full unedited copy. Well acted although one reading was by an OTT female.
It's amazing how the evil in Dorian Grey lives upto it's promise in modern times.

These are very entertaining stories with surprisingly progressive perspectives on issues that are just as relevant today.

These are acted performances with a cast of stellar actors who bring the plays to vivid life.

In each of the plays there is a moment when I felt very moved with sympathy for the victims.

Of course, the stories are contrived, adn they are old, but I think they are well worth listening to and are very entertaining.

Brilliant casts for all 5 of these plays. Wilde at his best, commentating the society of the day.

This is the second time I have listen to Mr Wilde pro's and I am glad I did, his works are enlightened the duality that it is to be human, love, passion and depravity in not so equal measure.

a great introduction to Wilde

Though some of the intermissions are outdated the recorded content is really good as an intro to the life of Wilde. thanks!

Amazing, play’s perfect, the picture of Dorian Grey was highly abridged, to much and the acting was pretty bad in places. Plays amazing and acting almost perfect with just a few issues. Especially liked a woman of no importanceand acting good

If you know the plays, this is a decent collection.
While the performance is OK, Audible does have much better available as single plays for most. That said I like the collection in one audio format.

I found 'Dorian Grey' interpreted for stage interesting. The snips of interview and the the Theatre sounds of the audience did evoke the sense of a live production. If you like Theatre, then you will know that not all performances are world class and can be a bit forgiving.

My suggestion is to check through Audible's collection of Oscar Wilde and listen to a few samples before you decide on this. Especially so, if you are really only interested in one or two plays.

This is a collection of five live performances of Oscar Wilde plays. All of these were wonderful. My favorites were Lady Windermere’s Fan and The Importance of Being Earnest. The Picture of Dorian Gray was not really an Oscar Wilde play but an adaptation of the novel which used lines dialog from other Wilde plays, which was only disappointing because of just having heard the identical lines in the other, preceding plays. This was the best adaptation of Dorian Gray that I have either seen or heard. The performances are very good and the writing is both funny and engaging. This is one of the best collections of plays I have listened to.

A Performance Not an Audiobook

Happy to have listened even though it was not an audiobook. Classic stories and great one-liners

All charming until Dorian Gray.

Mostly charming versions of Wilde's plays with some interesting interviews as intermissions. The whole effect is ruined by a really detestable dramatic adaptation of Picture of Dorian Gray. Poorly conceived and poorly executed.

The laughter in the background is annoying. I removed it from my device. Stopped at first chapter.

Pure enjoyment! Each work plays for about an hour and a half. Here is the list:

Keep in mind that these are plays being played by actors before a live audience, as opposed to audiobooks.

It's not an audiobook, but recorded performances

The performances are great and it is fun to listen, specially Wilde's witty humor. The audiobook itself is not like you're being read the actual plays, but hearing live performances of them.

I heard one quote and had to know more

I discovered Oscar Wilde through a quote attributed to him. His subtle humor is fantastic. I laughed rarely but smiled often.

I want to listen to this audio repeatedly just to soak up all the subtleties that I may have missed.

Somebody please tell me who else writes like Mr. Wilde!

A Great Many Trilled Consonants

This is not the best collection but if you're acquiring it because The Importance of Being Earnest is important to you, you might be disappointed. I recommend the BBC Anthology with Judi Dench in the cast (it's available here) - this collection's Earnest is performed rather badly, well, not badly but much too broadly. Earnest is a departure from the usual Wildean wordiness. The lines are succinct, the badinage is laden with double and triple entendres, and woe betide the director who allows the cast to make comedic deliveries. This play works best when the characters let themselves be upstaged by their lines.

I'm very fond of LATW and I can't quite figure out why their Cowards are so credible but their Wildes never quite cross the Atlantic. This flightlessness is particularly obvious in Lady Windermere; one half of the cast is laconic to the point of lethargy while the other side intones, breathes audibly and over-enunciates. It's impossible to imagine them on the same stage. Mr Stolz is a very disappointing and lackluster Lord Darlington. It's ironic - Darlington announces that he's 'leaving...going abroad' more than once in the play - Stoltz' Darlington is gone before the end of Act II, phoning in his lines from the queue at airport security.

The stories had a immense telling of the sinful human condition. There are the pleasantries of love but what overshadowed that was the lust of pride in every story.